‘Take Me Out’ terrific piece of theater 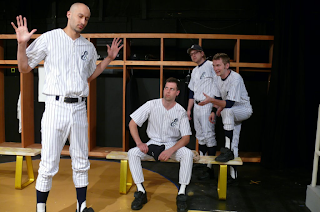 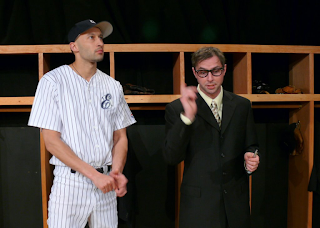 Published in The News Tribune June 8, 2007
pictured (top from left): Darren (Philipp Aurand), Shane (Erik Cornelius), Jason (Brandon Barnev) and Kippy (Paul Purvine).
(bottom): Darren and Mason (Brian Jansen)
photos by Toni Holom
The Pulitzer Prize-winning baseball drama “Take Me Out” has become a favorite of gay men. When it played at Seattle Repertory Theater, businesses catering to gay men advertised in the program with sly references to the famous shower scene – yes, there is full male nudity. In Olympia, Olympia Little Theatre is running a special performance to benefit Capital City Pride.
But “Take Me Out” is much more than just a gay-guy play. It is a deeply moving and, in parts, hilarious contemporary drama that delves into the complexities of racism, xenophobia, homophobia and men’s comfort level with their masculinity – or lack thereof.
Darren Lemmina (played with contained intensity by Philipp Aurand) is an almost godlike creature of mixed race who is revered as an athlete and a role model and who is so comfortable with himself that he casually refers to himself as godlike. And he is gay. His public coming out at the beginning of the play throws his friends and teammates into turmoil.
Some of his teammates suddenly find themselves uncomfortable showering with him. Shane Mungitt (Erik Cornelius), a troubled young upstart pitcher not long out of Arkansas and fresh from the minor leagues, publicly calls Darren a faggot and casually throws out every racial slur in the book. Darren’s best friend and a superstar on a rival team, Davey Battle (Tom Sanders, who also is the play’s director), turns against him; and his other close friend, Kippy Sunderstrom (Paul Purvine), walks a tightrope between loving acceptance and condescension.
It is a character-driven play. The simple plot, although well constructed, serves mainly as a vehicle through which to examine the complex relationships between the various players – how they react not only to Darren’s homosexuality but to his position as an African American icon; and how the American baseball players react to an influx of Japanese- and Spanish-speaking immigrant players.
Harsh realities – including sexual harassment and the killing of a player that may or may not have been accidental – are handled with a blend of stylized action and naturalistic acting, both of which are enhanced by OLT’s intimate space.
I saw this play at the Rep, where it had the advantage of a professional cast and expensive sets and lighting. Sets included an electronic scoreboard to rival those in big league stadiums and real showers with running water. The nude scenes were center stage, with nothing hidden.
In Olympia the set is much simpler, and there is no water in the shower scenes. The actors mime showering behind a waist-high tile barrier. The nudity is not completely hidden, but it is not as blatant as it was in Seattle. And that makes the nakedness much more natural and unaffected – not at all coy as one might expect. The play seems perfectly tailored to the smaller space. Compared with the Seattle performance, this one is less a theatrical spectacle and more an intimate peek into private lives.
In a style reminiscent of the narrator in “Our Town,” Purvine, as the likable but wishy-washy Kippy Sunderstrom, alternates effortlessly between narrator and character. Cornelius plays the bigoted and stupid redneck Mungitt with such conviction he makes your skin crawl. And his Southern accent is spot-on. (I say that as a native of Mississippi.)
But the real show-stopper is Brian Jansen as Darrin’s money manager, Mason Marzac, a nerdy gay man who has never before seen a baseball game but who idolized Darren and falls instantly in love with the game. Jansen provides much needed comic relief with broad gestures, a marvelous smile and, at one point, a jittery little dance of joy that has to be seen to be believed. People who saw him as Einstein in “Picasso at the Agile Lapin” will recognize his strange gestures. Here, he plays an almost identical character, only one who is more ingratiating and not so smart. I think we have the budding of a real comic genius in this actor.
I highly recommend “Take Me Out.” Be warned, however, that this play contains brutal language, nudity and scenes of violence.