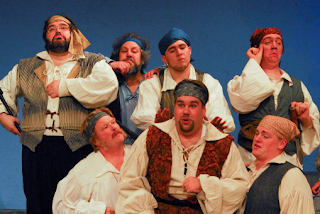 Review of "The Pirates of Penzance" at Lakewood Playhouse
published in The News Tribune, June 1, 2007

Anyone who loves theater but has never seen “The Pirates of Penzance” simply must – if for no other reason than to be able to catch all the references to it in other plays and on television. Next to Shakespeare, “Penzance” could very well be the most quoted and parodied play in theatrical history.

Plus, it’s just so much fun.

Ivy League fraternity boys and Anglophiles of all stripes go about singing “I am the very model of a modern major general.” Lines from the play have been quoted on “Dr. Who” and “Babylon 5” and “The Simpsons.” Aaron Sorkin must love it, because practically one whole episode of “The West Wing” was devoted to an argument over lyrics from this classic light opera, and Matt (Matthew Perry) on Sorkin’s “Studio 60 on the Sunset Strip” has a “Penzance” poster on his office wall.

And it’s a two-way stream. In every regional production of “Penzance,” directors traditionally sneak in local and pop culture references. The Lakewood police, along with other local institutions, are mentioned in the Lakewood Playhouse performance.

It’s kind of a highbrow-lowbrow thing. What else could it be when it features kindhearted pirates who devolve into puddles at the very mention of orphans? British to the bone, it is as silly as those more modern British imports “Mr. Bean” and “Fawlty Towers,” but with serious demands on operatic singers.

Wisely, Lakewood Playhouse chose a director and cast with opera training and experience. Director Barry Johnson has directed “La Bohme,” “Tosca” and “Trouble in Tahiti” at Tacoma Opera, and “The Merry Widow,” “The Magic Flute” and “Into the Woods” at Pacific Lutheran University’s Opera Workshop. He also has performed with both Seattle and Tacoma opera companies. And all of the lead actors have extensive experience in both opera and musical theater.

Jenny Shotwell, who plays Mabel, a ward of Major-General Stanley, is a soprano who seems to be able to hold trills and high notes far beyond what you would consider humanly possible. As the major love interest of Frederic, the pirate apprentice (Nathan Barnes), she is not given a chance to show off her acting skills beyond that of a typical romantic lead, which means her character is rather tepid – but her singing is awe-inspiring.

Barnes gets to do a little bit of comic acting, but like Shotwell, his character is far from fascinating. He does as much as can be expected with what is an ordinary leading-man role, and he sings beautifully.

It is the supporting characters who really shine as actors in this production – especially Ruth (Sibyl Adams), nurse to Frederic and servant to the pirates; the pirate king (Brett Youngquist); and Major-General Stanley (Ted Fredericks), the dandified fop and pretender to military glory.

Frederic has been indentured to serve as apprentice to the Pirates of Penzance until his 21st birthday. On that long-awaited day, the beautiful young wards of Major-General Stanley meet up with the band of pirates. They all pair up and fall in love, but it is unacceptable that these high-born young ladies marry dreaded pirates.

Meanwhile, Ruth has long been infatuated with Frederic. Ruth is an unattractive 40-year-old with missing teeth. Since Frederic’s never seen another woman, he believes her when she tells him she is beautiful. (Gilbert and Sullivan never claimed their story was believable.) But then he meets Mabel. Immediately they fall in love, and he casts Ruth aside.

Then Frederic discovers that his apprenticeship cannot end after all because he was born on Feb. 29 in a leap year. He may be 21 years old, but he’s only had five birthdays. He has to continue his apprenticeship for 64 more years.

Being a slave to duty (the subtitle of the play), Frederic agrees to the long-extended apprenticeship, and Mabel agrees to wait for him. Ah! They are so noble!

Judy Cullen once again proves that she is one of the best set designers in the region. The costumes by Frances Rankos, assisted by Sylvia Shaw and Dorothy Kephart, are simple but colorful. A behind-the-scenes orchestra conducted by Jeff Anderson is excellent, with a really nice touch of two video monitors showing him at the piano.