John Lennon came to our house on Tuesday -- in spirit -- along with the piano on which he composed the song "Imagine" and along with out dear friend, singer/songwriter Steve Schalchlin; our son, Noel; our friend and former housemate (and Noel's "second mom") Catherine; and many of our closest friends. 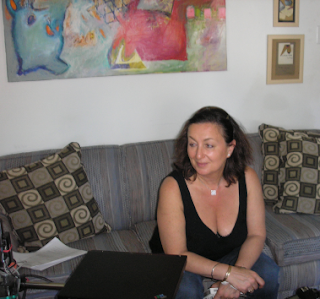 Steve sang "Imagine" and "Will it Always be Like This," a song he wrote about our son Bill, and about Gabi's efforts to turn the tragedy of Bill's death into something positive. There were requests for other songs, and then most of the guests got a chance to sit at the piano. Our friend Anna played "Chopsticks," and a young neighbor girl surprised us with a great Scott Joplin ragtime tune. 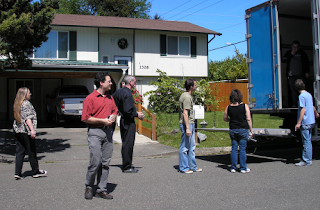 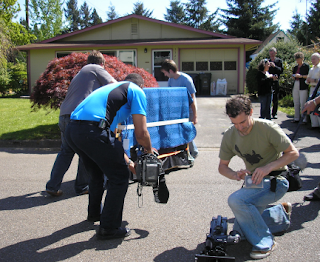 Film crews document the unloading of the piano. 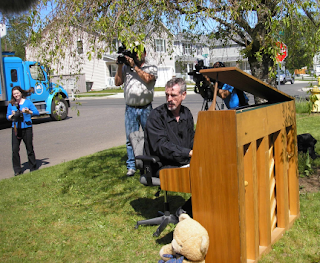 Steve plays "Imagine" on John Lennon's piano in the shade of our weeping cherry tree. Bill collected stuffed animals. The ones pictured here were his favorites. (He made the little blue one that's almost cut off on the edge of the photo.) 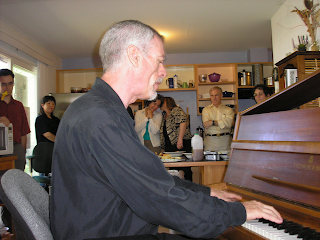 After everyone got their turn at the piano, it was moved inside and set up in the kitchen where I found Bill on the floor 12 years ago. Steve played many more songs. There were tears and hugs and voices joining in. "The Closet," an upbeat and funny song about coming out of the closet, brought peals of laughter; and "The Group," a song about Steve's life with AIDS before new drugs brought him back from the brink of death, dampened most of the eyes in the house. Pictured in the background are, from the left: Noel; our neighbor, Junko; Sarah; Catherine; Bill and Noel's favorite teacher from high school, Gary Gerst; and Gabi. 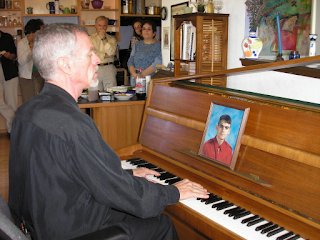 Someone placed Bill's photo on the piano. Everyone joined in to sing "In My Life" and "Give Peace a Chance."

Much more has been posted about this event on Gabi's blog and Steve's blog.

The Olympian posted an article, video and photo gallery.