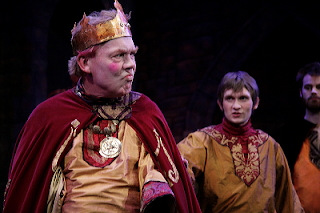 Published in The News Tribune May 11, 2007
Pictured: Anders Bolang as Henry and Paul Purvine as an atendee. Photo by TorStudios.
Enrico IV: The Holy Roman Emperor,” performed by Harlequin Productions at the State Theater in Olympia, is one of the strangest, funniest and most challenging plays you might ever see.
I’m talking “Waiting for Godot” strange and “No Exit” strange. I’m talking funny and challenging a la Sam Shepard and Tom Stoppard.
On the night I attended, the audience didn’t know quite what to make of it, most noticeably during Act 1. I could sense that they didn’t know whether to laugh or when to applaud. At the closing of the first act, there was silence from the audience. But early in Act 2, everything seemed to click in place, and I could sense relief as the audience began to get it. Director Scot Whitney said he had observed similar reactions in every performance.
Written in 1921 by Nobel Prize-winning Italian playwright Luigi Pirandello, “Enrico IV” is seldom produced in America – perhaps because it is so challenging.
There are many English translations, including one by Stoppard that Whitney said he was disappointed in. But he loved the translation by Robert Cornthwaite, which he saw at the Oregon Shakespeare Festival. It was “one of my five favorite theatrical experiences of all time,” Whitney said, noting that: “Pirandello deals with challenging questions about the nature of reality, but tosses them all up into an exuberant, comic absurdity. He’s shaking us with one hand and tickling us with the other. It makes you feel like a kid playing with a giant psychological jack-in-the-box. Anticipation is built, and we hold our breath. When it goes bang! we laugh and scream at the same time.”
The story takes place in Italy in the early 1920s. A man who is never identified by name – who is referred to simply as “Him” or as the more imperious “Himself” – had been thrown from his horse during a pageant in which he was playing the role of the 11th-century German monarch Henry IV. His brain was damaged from the fall. From that point on, he thinks he is, in fact, Henry IV. For 20 years, he has continued to live out this delusion. His friends help keep the delusion alive by building an elaborate throne room for him, dressing in costume and treating him as royalty. There is even a troupe of four court attendants who serve as both servants and advisers to the “king.” They are obviously as insane as he is, but at least they know they are playing roles. At least they know it is 1920, not 1077.
But does Henry know? Is he truly insane, or is he playing along with the elaborate hoax? Would any sane man continue to live in a make-believe world for 20 years if he were sane enough to know the difference between fantasy and reality? Layer after layer of the complex relations between sanity and insanity are peeled away as the play progresses.
The program for this play includes director’s notes from Bonnie J. Monté, who directed a 2002 performance at The Shakespeare Theatre of New Jersey. One paragraph of Monté’s notes succinctly explains Pirandello’s genius: “The tragic inner cores of Pirandello’s plays are so powerful they overshadow the comic outer shells in which they are encased; while the plays are often hysterically funny throughout, the last acts of his works typically end with actions or revelations that are so stunning for the characters and audience, that agony prevails over comedy; traditional comedies end with resolutions, Pirandello’s end with gaping wounds and unanswered and unanswerable questions.”
How beautifully that describes “Enrico IV.”
Although the character who thinks he is Henry is on stage during less than half of the play, when he is on stage, it is practically a one-man show. It is written that way.
Anders Bolang is Henry. He looks and performs much like Albert Finney. With his broad, comic gestures and agonized facial expressions, Bolang makes Henry’s insanity palpable.
Nyree Martinez, as Henry’s former lover Donna Matilda, is outstanding. Russ Holm stands out as the Viennese Doctor Dionisio Genoni, an obvious parody of Sigmund Freud; and Steve Manning plays the theatrical Barron Tito Belcredi with great bluster.
Among the puppet-like attendees, Paul Purvine and Brian Jansen strike just the right note of absurdity. It might be noted that in the first act, Holm, Manning, Purvine and Jansen all appear to ham it up far too much, but gradually their histrionics become integral to their characters.
The set designed by Nate Kirkwood is on a level with the best sets seen at professional theaters such as Tacoma Actors Guild and Seattle Repertory Theatre. Jill Carter’s lighting is both dramatic and comfortable. And once again director Scot Whitney has guided his troupe to an inspired performance.
WHEN: 8 p.m. Thursdays-Saturdays, 2 p.m. Sundays through May 19
WHERE: State Theater, 202 Fourth Ave. E., Olympia
TICKETS: $24-$33; $12-$15 rush tickets available a half-hour before curtain
INFORMATION: 360-786-0151; http://www.harlequinproductions.org/
Posted by Alec Clayton at 10:06 AM