Have rollickin’ good time at ‘Texas’ 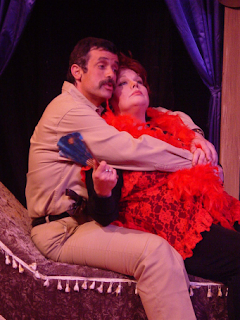 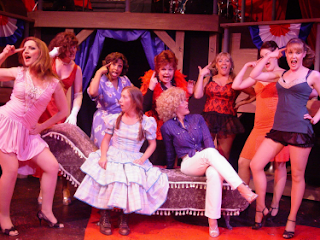 "The Best Little Whorehouse in Texas" at Capital Playhouse

I thought I’d never use that expression because it is such a cliché, but nothing else so perfectly describes “The Best Little Whorehouse in Texas,” now playing at the Capital Playhouse in Olympia.

Many people saw the film starring Dolly Parton and Burt Reynolds, but far fewer have seen the stage version, which is much better than the film. The play has everything you could want in musical comedy, from happy hookers and sleazy politicians, to dumber-than-dirt farmers and football players, to the most outlandish spoof of a television evangelist ever seen on stage (although he’s not an evangelist; he’s a news commentator).

Miss Mona (Jennie May Donnell) is the madam of the Chicken Ranch, a classy little whorehouse outside a small Texas town. The Chicken Ranch, based on a real house of prostitution in Texas, has been in existence for well over a century. Up until
now, the police and politicians have politely looked the other way, and most of them have been customers at one time or another. Sheriff Ed Earl Dodd (Philip Mitchell) even had a long-ago romance with Miss Mona, and remains a close friend.

Two new girls come to work at the Chicken Ranch. Angel (Deanna Barrett) is a seasoned professional whose sexy demeanor and dirty mouth have to be toned down by Mona. Miss Mona wants her girls to be polite and classy. They never talk dirty. Mona and the girls explain the rules of the house in the rocking song “A Little Ole Bitty Pissant Country Place.” The other new girl, nicknamed Shy (Stephanie Nace), is a skinny country girl who shows up wearing an old-fashioned dress, sporting pigtails and carrying her worldly possessions in a paper sack. Shy wants very much to be a working girl, and she makes an rapid transition from country bumpkin to alluring sexpot.

Everyone is happy until the TV reporter Melvin P. Thorpe (Josh Anderson) decides to start a crusade to close the Chicken Ranch. He enlists the help of a bunch of religious busybodies and stirs up a media circus. The sheriff, the governor and a
state senator are all put on the hot seat because half their constituents want them to shut down the whorehouse, and the other half want them to butt out.

Donnell, an Equity actor who has been featured in Capital Playhouse productions such as “Sweeney Todd” and “Gypsy,” is outstanding as Miss Mona, and Mitchell pairs well with her as Sheriff Dodd. They play their characters as down-to-earth and believable people, in contrast to the rest of the cast, all of whom play their characters as billboard-size cartoons. Donnell’s Miss Mona is a loving and kind mama to all the girls, and she has a sweet and mellow voice. Mitchell, who looks and acts a lot like Edward James Olmos, is thoroughly believable as a small-town lawman with a hot temper.

Chris Serface is hilarious in a variety of supporting roles, including a redneck businessman with a screeching voice that is a little hard to take, and the buffoon of a governor who does a great tap dance.

With his white coat and hair swept back in a pompadour about 8 inches high, Anderson’s Thorpe looks and acts like the love child of Jimmy Swaggart and Liberace.

Also outstanding are Nace, Barrett, Marisa Kennedy as Jewel and Casey Raiha, a member of the ensemble whose voice is like honey.

“Whorehouse” is an adult-themed show. There is R-rated language and simulated (but highly stylized) sex, and although there is no nudity, some of the costumes leave little to the imagination. It is one of the funniest shows I’ve seen this year, and the music is great.