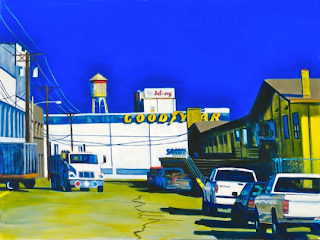 Published in Weekly Volcano, May 24, 2007
pictured: "Goodyear" oil on canvas by Ashley Wells

At the risk of stating the obvious, Ashley Wells’ paintings at Two Vaults Gallery are Hopperesque.

Edward Hopper set the standard for the type of urban landscape Wells paints, and the inevitable comparison is not fair to Wells or anyone else who paints gritty urban scenes marked by strong lighting and deep shadows. So I won’t compare them. I simply mention Hopper to give the reader a mental picture of what Wells’ paintings look like.

Gallery owner Paula Tutmarc calls these paintings gritty and pretty. The subject matter is gritty — blighted industrial and commercial areas of T-town where there are few people and where the curbside vehicles look more abandoned than parked. (I was told that many of the businesses pictured are no longer there; Wells chooses areas of town that are in constant flux.) The painting style is pretty — almost too pretty. Most notable is her use of bright, sweet colors. Her skies are too bright and sunny and the paint on her buildings too sparkly clean. I don’t say that to be critical. After all, she is painting pictures, not documenting urban blight; if she wants to make her city scenes as colorful as a circus, she has every right to make that choice. It was her use of color that first attracted me to her paintings.

“Crossing 24th” employs the same blue and yellow-green combination, but with a lighter blue sky, ultramarine shadows on the side of a white building, and with a risky but workable use of red and red-orange on other buildings.

“Chicken Teriyaki,” which pictures the white front of Chinese Garden Restaurant next to the red arches of Stone Garden Restaurant on South Tacoma Way, employs extreme contrasts in dark and light with some of the most beautiful blue shadows you’ll ever see. A man is pictured walking past the restaurant, one of the rare cases in which people appear in Wells’ paintings. The placement of the man and the colors of his jacket and jeans — especially as they relate to the store window behind him — are masterful. In this instance, I must evoke the term “Hopperesque” again. I know, I said I wouldn’t. But this is so much like Hopper it’s almost eerie. Only a very astute artist or one who is blessed with blind luck could make such a perfect compositional choice.

At her best, Wells is outstanding, but not all of these paintings come up to the standard of “Goodyear” and “Crossing 24th.” In some of them, I get the feeling she was more concerned with documenting an actual place, getting all of the details just right, than in painting a masterful composition. For instance, “Goodyear” would have been much better if she had not painted the crack in the pavement. Obviously she was fascinated with that crack, but it simply detracts from an otherwise beautiful design.

If Wells was a student and I was her teacher, I’d suggest two things. First, simplify, get rid of everything that’s not essential — essential to the design, not to the documentation of a scene. And second, use some heavier paint. These paintings simply cry out for lush paint laid on like icing on a cake. If she used heavier paint, those deep blue shadows she paints so well could be washed over in transparent layers that would simply dance on the canvas.

Also showing at Two Vaults are metal sculptures by James Kelsey, who is best known for his massive works for the Tacoma Police Memorial sculpture project. Here, he shows smaller works in scrap metal.