Actors don’t pussyfoot in this ‘Cat’ 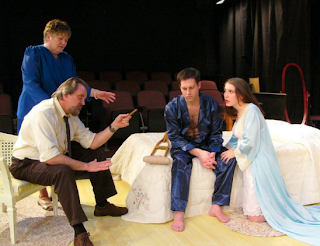 published in The News Tribune, May 4, 2007
pictured: Big Mama (Jacqueline Plett), Big Daddy (Steve Nuehring), Brick (Erik Cornelius) and Maggie the Cat (Abby Wells), photo by Toni Holm.
Tennessee Williams’ “Cat on a Hot Tin Roof” at Olympia Little Theatre is among the greatest American plays ever written. Fifty-two years after it premiered, it has not lost one iota of its emotional impact.
“My characters make my plays,” the author said, “They build the play about them like spiders weaving their web, sea creatures making their shell.”
And what marvelous characters they are. Even their names evoke powerful images: Brick, the cold and brooding alcoholic who can’t abide the touch of his sexy wife, Maggie the Cat, who is desperately in love with him; Big Daddy, the overbearing and larger-than-life patriarch; Gooper, the despised older son, and his fawning wife, Sister Mae; and Big Mama, the matriarch who impossibly tries to hold together her broken family.
Modern audiences may find these characters a bit outlandish, but, while being a bit one-dimensional, they are anything but caricatures. I know. I grew up near the Mississippi Delta setting of Williams’ play during the time period in which it takes place, and I knew people just like every one of his characters.
Brick is a former football hero obsessed with demons from his past and married to a woman he now detests. A hopeless drunk, he limps on a single crutch because the night before he broke his ankle while trying to jump hurdles at the high school track – stupidly trying to relive past glories. He refuses to sleep with his wife, Maggie, who is as beautiful and sultry as a Southern night. She is afraid that sex appeal is the only thing she has with which to hold onto her husband, but he is untouched by her beauty.
And she cannot compete with the memory of Brick’s dead friend Skipper. When she implies that there may have been a homosexual component to the friendship between Brick and Skipper, Brick explodes in anger, accusing her of “making dirty” a pure and noble friendship. Yet the possibility that there may have been homosexual love between Brick and Skipper, whether suppressed or expressed, never goes away

Big Daddy, who rules the roost with an iron fist, is dying of cancer, but his doctor has told him he just has a spastic colon. His sons and their wives argue over whether or not to tell Big Daddy the truth. Gooper and Mae also fight with Maggie over who should inherit Big Daddy’s plantation – 28,000 acres of the most fertile land west of the Nile. Brick is too drunk to care.
The casting is perfection. Abby Wells has the face and figure to play the beautiful Maggie, and her 1950s makeup and hairstyle are just right. She nails the sultry aspects of Maggie’s character, but could play the emotional outbursts a little more explosively. Erik Cornelius has the athletic body, brooding good looks and dramatic timing to be a thoroughly believable Brick. Corey Moore comes across stiff and haughty, making the odious Gooper just as detestable as he should be, and Hannah Eklund is equally disgusting as Gooper’s uptight and manipulative wife, Mae. As Big Mama, Jacqueline Plett appears matronly and clueless.
Best of all is the amazing Steve Nuehring as Big Daddy. Forget Burl Ives; this guy looks and sounds like he was born into the role of Big Daddy. He struts and sputters, he keeps hitching up his oversized britches and chewing on a big cigar; his face turns red; he screams and chortles. His face and body language run the gamut of emotions as he struggles to communicate with his son, Brick, and to do what is always so terribly hard for big and powerful men – to show a little human love and compassion.
Nuehring gets my nod right now for best supporting actor in a drama.
The choice to use recorded voices instead of child actors for Gooper and Sister Mae’s children, otherwise known as the no-neck monsters, was unfortunate. The voices created a surrealistic feel not in keeping with the spirit of the play.
The harsh lighting was also unfortunate. Lighting in a Southern plantation home in 1955 would have been much warmer and softer. But these are minor quibbles about an otherwise excellent play.
WHEN: 7:55 p.m. Thursdays through Saturdays and 1:55 p.m. Sundays through May 13.
WHERE: Olympia Little Theater, 1925 Miller Ave. N.E., Olympia.
TICKETS: $10.
INFORMATION: 360-786-9484
Posted by Alec Clayton at 11:47 AM