‘Full Monty’ gets an American takeoff 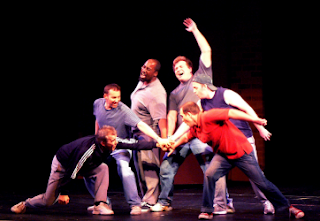 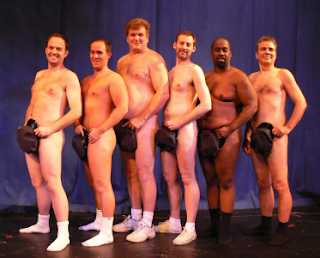 Published in The News Tribune April 27, 2007
The Tacoma Musical Playhouse is staging an Americanized stage version of the British film “The Full Monty” through May 25.Now playing at Tacoma Musical Playhouse is the musical “The Full Monty” (book by Terrence McNally and music and lyrics by David Yazbek), an Americanized version of the 1997 British film.
The setting has been moved from the English steel town of Sheffield to Buffalo, N.Y., and a few of the characters’ names have been changed to sound more working-class American (meaning Irish and Polish immigrants). Most notably, Gary “Gaz” Schofield from the movie is Jerry Lukowski in the stage play (played here by Scott Polovitch-Davis), and Lomper from the film is Malcolm MacGregor (Jerod Nace). Also, the disco soundtrack from the movie is replaced by a more traditional score in the play, blending rocking show tunes with tender ballads.
The story remains pretty much the same. The mill has shut down, and the steel workers are unemployed, bitter and unwilling to take demeaning jobs at Wal-mart. Plus, their home lives are pretty dismal. Dave Bukatinsky (Tyler Rickdal) is overweight and impotent; Jerry is divorced and on the verge of losing joint custody of his son, Nathan (Grant Troyer); Malcolm, who lives with his elderly and dependent mother, is ready to end it all; and Harold Nichols (Dan Engelhard) is afraid to tell his wife that he’s been unemployed for six months.
When Jerry discovers that their wives are paying big bucks to see the Chippendale male strippers, he decides that he and his buddies can make a bundle by doing their own strip show. He recruits Dave and Malcolm, and then Harold; and they audition other potential strippers – all of whom are out of shape and can’t dance or sing very well.
An aging show biz personality named Jeanette (Lark Orvick-Moore) shows up out of nowhere to play piano and stage-manage the auditions. She tells the men they’ll know when the right man shows up to audition because “He’ll glimmer.”
Their first recruit is an overweight, elderly black man nicknamed “Horse” (Ekello Harrid). To everyone’s surprise, he breaks into a wild and sexy song-and-dance number, “Big Black Man,” that pokes fun at stereotypical myths about black men.
Next to arrive is Ethan (Sam Pettit), who says he has something special to offer even though he can’t sing or dance. Then he drops his pants and Jeanette says, “Gentlemen, put on your sunglasses. We suddenly have a lot of glimmer.”
When some of the women find out what their men are up to, surprising things happen. First, the wives most likely to be upset by the whole thing turn out to be supportive; and second, they just don’t believe that the men can possibly come up with something better than what the Chippendales have to offer. That better thing turns out to be The Full Monty, British slang for taking it all off, or full frontal nudity. What happens in the TMP production, however, is what we might call a 99.9 percent Full Monty. And you’ll have to see for yourself what that means.
This play is rife with satire on gender and race, and jokes about body parts and men who are insecure in their sexuality, some of which pushes the boundaries of good taste. There is explicit language – lots of it, and nudity. The packed house on opening night loved it.
The show has several musical highlights, and, as usual, Jon Douglas Rake’s choreography adds spark to the performance, most notably on “Michael Jordan’s Ball,” a dance number with the men pretending to be basketball players.
Outstanding lighting is crucial, especially in the climactic strip number. Kudos to John Chenault for his lighting design and light board operators Darla Graham and Cary Stacy.