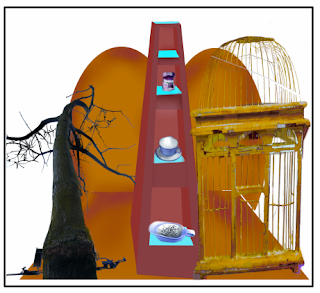 Beatrice Geller and friends hang at Pacific Lutheran University
Published in the Weekly Volcano April 26, 2007
pictured: "A Child's Nightmare" (Narrative #5 by Geatrice Geller
The show is called Color and Form, but I prefer to call it Beatrice Geller and Friends. It features digital photography by Geller, a Pacific Lutheran University art faculty member, with other works by Tom Michael, Carol Adelman, Stephen Rock and Jessica Spring. It’s really Geller’s show, but some of the others are well selected to complement her work.
Geller’s photographs present implied narratives with a surrealistic twist and a clash of opposites — such opposites as the delightful world of a child’s imagination and the harsh realities of the real world. Her style and color choices highlight such clashes of different worlds. Her often harsh images, for example, are presented in the sweetest colors imaginable. They’re like weapons made out of candy.
But before talking about Geller’s narrative images, I should mention a group of landscapes in which she superimposes mirrors and circular lenses that slightly distort the scene. These are very much like some paintings by the great René Magritte. Geller, by the way, says that Magritte is one of her favorite artists.
Her more narrative works are presented in series with groups of pictures showing progressions within a theme. “A Child’s Nightmare” numbers one through five show various stages in a dream. No. 1 is a minimalist image of a kind of runway heading into a red heart. It is limited to a single abstract form in shimmering color. In No. 2, a pyramid-shaped, red bookcase with blue shelves is added. In No. 3, a child stands on the runway holding two giant lollipops. An ominous black tree appears in No. 4. In No. 5, the child vanishes and is replaced by a gilded birdcage. On the bookshelf are: a creamer bowl with nails in it, a cup of salt and a set of false teeth. There are many possible interpretations to these images, but what is clear is that the child’s nightmare begins as a sweet and innocent dream and gradually becomes more and more frightening.

Another Geller photograph presents a Dadaistic image of a butterfly caught in a mousetrap. It is a realistic photograph of an unlikely event. In other pictures, various abstract versions of this same butterfly-in-a-mousetrap appear in conjunction with bridges, trees, flowers and colorful abstract shapes.
Contrasting in style and imagery with Geller’s photographs are metal and found-object sculptures by Tom Michael. Michael combines rusted metal shapes with knotty wood and various found objects to create asymmetrically balanced freestanding sculptures that have the feel, if not the actual look, of birds in flight, or perhaps a winged angel from ancient Greece. I’m reminded particularly of the “Nike” from Samothrace or even the contrapposto pose of the “Venus de Milo.” They also look a lot like some of Morris Graves’ late sculptures, such as the “Instruments for a New Navigation” that were shown at the Tacoma Art Museum in 2000.Michael’s traditional-modernist sculptures are well crafted and designed, but there is one with a ceramic bowl, a silver necklace and a mask that is too decorative and does not fit in this show.
Stephen Rock is a sculptor from Seattle, but in this show he is not showing sculpture. Rather, he is showing a group of delicate drawings and watercolors that look like preliminary studies for sculpture. Interestingly, they could easily pass as studies for Michael’s sculptures.Jessica Spring of Springtide Press shows some of her classically designed and presented book art in a glass case. Sorry, you can’t thumb through these books.
Carol Adelman shows a small group of portrait paintings in dull colors with elongated strokes of thick paint reminiscent of some of van Gogh’s early works.
I don’t get to the University Gallery at PLU very often simply because it is a little bit off the beaten path. If it is easy for me to overlook this gallery, I’m sure the same holds true for many Weekly Volcano readers. But this show is worth the drive to Parkland from wherever you might be in the South Puget Sound region.
[Ingram Hall PLU University Gallery, through May 2, Monday-Friday 9 a.m.-4 p.m., 121st and Wheeler, Parkland]
Posted by Alec Clayton at 9:06 AM