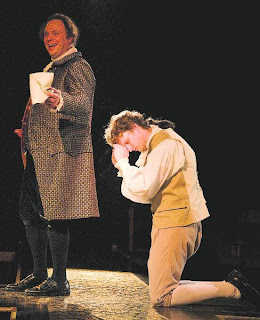 Published in The News Tribune, April 6, 2007
Pictured: John C. Brown as Antonio Salieri, left, and Bryan Bender as Mozart. Photo by Dean Lapin.
You might remember the Academy Award-win­ning movie “Ama­deus,” starring Tom Hulce as the giggling man-boy Wolfgang Amadeus Mozart, and F. Murray Abraham as the dark and conflicted Antonio Salieri. Most memorable in the movie was Mozart’s amazing laugh – a high-pitched and explosive screech – and his virtuoso piano playing.
In the production at Lakewood Playhouse, which stars Scott C. Brown as Salieri and Bryan Bender as Mozart, that hyena laugh is still in evidence, but the music takes a back seat to the drama, and Salieri’s role looms much larger.
An exquisitely stylized artifice – which is how Salieri describes a Mozart opera – the play is more abstract than the movie and more visceral.
The stage is set by the two Venticelli (Jamie Pederson and Darrel Shephard). Described by playwright Peter Shaffer as “purveyors of fact, rumor and gossip,” the Venticelli are silly, fey, powdered and bewigged young men who prance about and tell the audience (and Salieri) what is going on. They are Salieri’s paid spies and also serve as a Greek chorus. They announce that Salieri claims to have killed Mozart, but that nobody believes him. And then Salieri is wheeled on stage in a wheelchair, and he begins to plead his case to the audience as if addressing a jury. From this point on, Salieri becomes – like the God he mocks and cajoles throughout the play – a trinity: a bitter and dying old man; the actor in his own story; and the narrator who harangues God and explains to the audience what is going on.
This is a highly demanding role, and Brown proves more than adequate to the challenge.
Early on, Salieri bargains with God to make him a great and famous composer. Success follows soon after, convincing him that God has accepted his bargain. But then God brings a rival to Vienna, the young genius Mozart, who is much greater than Salieri; Salieri then believes God has betrayed him.
He vows to destroy God by destroying his creature, Mozart. And in order to destroy Mozart, he must become his mentor and benefactor. He pretends to guide Mozart’s career while actually seeing to it that he is penniless and that his marvelous music never gets the audience it deserves.
Bender’s Mozart is just as silly and childishly insane as the memorable Tom Hulce character in the movie. He looks and acts a lot like the great comic actor Crispin Glover, and he plays Mozart as a sex-obsessed and potty-mouthed overgrown child. During the course of the play, he goes from a fun-loving child secure in his awareness of his own genius to a desperate and destitute man falling apart from the inside out and completely at the mercy of his destroyer, Salieri.
Despite a highly complex plot, the play is engaging and easy to follow. It is beautifully directed by Scott Campbell. Dramatic lighting by Ali Criss and a classic set designed by Erin Chanfrau enhance the drama. The acting is superb. Both Bender and Brown stand out in their complex roles. Lauren Wood does a commendable job as Mozart’s wife, Constanze, and Pederson and Shephard are hilarious as the Venticelli.
The music is recorded. The gilded piano has no keyboard. But music is important to both the mood of the play and the progression of the plot. Some of the most inspiring moments come when Salieri describes Mozart’s music as the music plays in the background. The more he hates Mozart, the more he loves his music. It is, to him, God’s voice on Earth. And Brown conveys this rapture convincingly.
Even though some of Salieri’s monologues and harangues are overly drawn out and the play is awfully long, “Amadeus” is easily among the top five plays I have seen since beginning this column four years ago. It is a roller-coaster ride between peaks of hilarity and depths of despair. Mozart’s language, while appropriate to the character, may be offensive to some audience members.
WHEN: 8 p.m. Fridays and Saturdays and 2 p.m. Sundays, through April 22
WHERE: Lakewood Playhouse, Lakewood Towne Center
TICKETS: $18 general admission, $15 seniors and military, $12 under 25 years of age
INFORMATION: 253-588-0042,
Posted by Alec Clayton at 12:43 PM