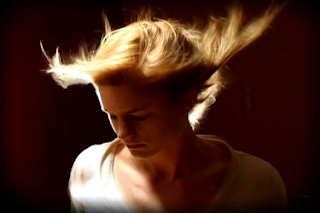 The new show at Black Front is just OK
published April 19 in the Weekly Volcano
Photo: Courtesy Photo
“Thinking,” a video by Rodrigo Valenzuela.
I confess: I play favorites. I review my favorite galleries over and over again while ignoring many others. That’s because I’m old and jaded. I’ve been around too long to subject myself to reworked Americana and calendar art and amateurish offerings of whatever stripe.
This week I revisited one of my new favorite galleries — Black Front in Olympia — and I discovered that it’s not so much a favorite this month. The current exhibition is a group show that’s only marginally interesting.
Rodrigo Valenzuela is a video artist who combines stillness and movement in strange and haunting ways. I was privileged to preview a few of Valenzuela’s videos, not all of which are on display, and found that they can be fascinating if you have the patience to watch for the painfully slow changes. The only video showing in the gallery is a still image of a beautifully backlit woman with hair blowing in the wind to the accompaniment of musical wind sounds. On weekend evenings, the artists will be in the gallery to project some of his videos on a screen that will be placed in the front window. That should cause traffic jams on the sidewalk, and I imagine it will be a huge crowd-pleaser during Olympia Arts Walk Friday and Saturday, April 27 and 28.
Rachael Lang’s photographs have a bright, contemporary look. There are six of them, each approximately 16-inches square and displayed in a horizontal row as a single piece. The individual photographs are of stones on an embankment behind a house, a school with children on the playground, a hot house, a pair of waterslides in a pool, a racetrack with deep red cinders and the greenest green grass imaginable, and a field of kudzu-covered trees. A press release describes Lang’s photographs as “found objects within ordinary neighborhoods” — not a bad description.
Bethany Hays paints decorative and slightly surrealistic images of children at play. Readers of this column may remember that she won the Juror’s Award at the recent juried show at South Puget Sound Community College. She has a deft touch and a good feel for color. The two large paintings in soft pastel colors on the back wall are particularly inventive. One pictures a little girl feeding a baby a bottle. The girl’s head is crowned with flowers, and bunnies float halolike around her head. The other painting shows a boy crawling on hands and knees wearing a party mask. Rectangles of soft greens and pinks in the background are made from pieces of canvas that appear to have been cut with pinking shears. Among the other three Hays paintings is “Know by Heart,” a painting I praised in this column when it was in the SPSCC show. For some reason it is not as impressive here.
Jahnavi Hastings captures teens in natural settings. Her photographs look like snapshots, but they are more carefully composed. Here she is showing a grouping of 19 photographs in a random arrangement. They are nice shots, but nothing to rave about.
The most interesting artist in the show is Andrew Wood, an illustrator whose works have a lot of stylistic similarities to typical graphic novel illustrations. But there’s something special about these that perhaps sets him apart from the ordinary. His drawings in pen and ink, acrylic, markers and Photoshop combine fluid lines with a brittle surface quality in an intriguing way. Gnarled tree limbs and skeletal figures play a large role in his drawings. One of the better ones shows mirror images of an emaciated old man reaching with boney hands toward a spiky tree. A knot on the tree looks like a human heart. Most interesting is a book with torn pages that viewers can thumb through carefully. It is very fragile.
[Black Front Gallery, through April 11 a.m. to 7 p.m. Sunday-Thursday and 11 a.m.-9 p.m. Friday and Saturday, 106 Fourth Ave., Olympia, 360.786.6032, www.theblackfrontgallery.com]
Note: After this review was published I found out that Jahnavi Hastings is only 16 years old.
Posted by Alec Clayton at 11:46 AM