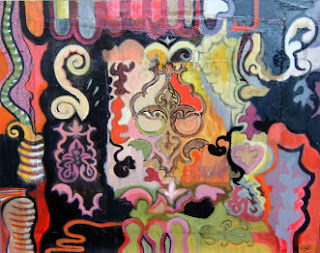 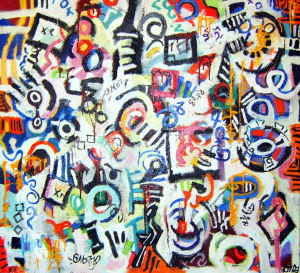 Art On Center owners C.J. Swanson and David N. Goldberg show their own works
published in the Weekly Volcano April 12, 2007
pictured: top, "Decor Galore," acrylic on panel, by C.J. Swanson; bottom, "Festoon," acrylic on canvas, by David N. Goldberg (may show as left and right on some monitors)
Ah, The Vanity Show. What chutzpah! Art on Center owners C.J. Swanson and David N. Goldberg are showing their own paintings to mark the gallery’s second anniversary. This exhibition is an update on Art on Center’s premiere show two years ago, which is especially appropriate since this is slated to be the final show in the Center Street space before Swanson and Goldberg move to spacious new quarters on Sixth Avenue in June.
Both of them are damn fine painters. They are partners in marriage and in business, and they share studio space, so similarities in their work should not be surprising. Both are abstract painters. Both display a penchant for repetitive forms in allover patterns and bright colors. But there are differences as well.
Swanson’s paintings are more decorative. Her shapes and lines are more deliberate and more fluid. When not working on her paintings, she does faux finishing and paints theatrical backdrops, and a lot of carryover from those crafts shows up in her paintings. She is also all over the map from one painting to another. If I didn’t know better, I might think four or five different artists are represented by her work. Could it be that she has multiple personalities?
No, she’s just very creative and keeps experimenting with new looks and techniques.Goldberg’s paintings, on the other hand, vary almost not at all from one to another. His paintings are more expressive than Swanson’s, and most of them are larger. They are gritty and explosive, and the staccato shapes that dance all over his canvases are painted more loosely than his wife’s more carefully controlled forms.
Goldberg fills the surface of his canvases with loosely brushed rectangular boxes of flat color — dull, yellow-green, pink, blue, and a brilliant transparent crimson. On top of and into this, he paints circular forms and calligraphic marks. Like Mark Toby and Jackson Pollock — but more jagged than Toby and less fluid than Pollock — he distributes these marks evenly across the surface, giving equal weight to everything. In his two latest paintings, “Festoon” and “Return,” he has broken out of this formula and done away with the gridlike underpainting, letting his calligraphic marks float freely in fields of white. I think these two paintings are his best.
The best of Swanson’s is a single painting of stars on fields of circular discs called, appropriately, “Star.” It is painted on four 14-inch square panels that are put together in a long horizontal format. I like the way the panels relate to one another, and I love her rough and brittle paint application.
One Swanson painting, titled “At,” simply doesn’t work. One Goldberg painting doesn’t work either. It’s the little painting called “Intesection.” It has a lot of square shapes but none of his signature circles and calligraphic marks. Take away these two paintings and this is a helluva good show.
[Art on Center, “The Vanity Show: C.J. Swanson and David N. Goldberg,” through May 5 noon to 5 p.m. Wednesday-Saturday, 1604 Center St., 253.230.8180, www.arton center.com]
Posted by Alec Clayton at 9:10 AM