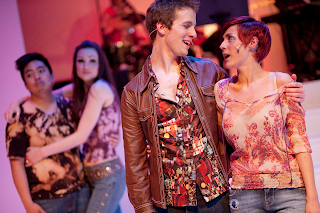 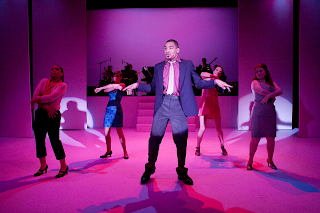 The British are coming, and it’s a cause for celebration.
by Michael Dresdner

“If you remember the 60s” goes the stoner expression, “you weren’t there.” No matter. Centerstage Theatre gives you a do over with “I’m Into Something Good,” but in this case, “good” is a staggering understatement. This show is flat out stupendous; a tour de force that truly earned the full standing ovation the opening night audience gave them.

“Something Good” is not a play or even a musical, but a fast paced, exhilarating, flawlessly executed concert of non-stop song, dance, costumes and moods showcasing more than 50 of the best sixties songs from the “British invasion.” Every element of this Alan Bryce and David Duvall collaboration is perfect, with costumes, choreography, lighting and a skillfully cast group of four men and four women not just mimicking the period, but convincingly recreating the experience we white hairs remember.

David Duvall, a brilliant musician with an encyclopedic knowledge of genres, is both musical director and on stage band leader, and his skilled fingerprints are all over this production. A five piece band, with David covering several keyboards, sits on a riser at the rear of the stage. They segue seamlessly from one set to the next without a gap, adroitly nailing each group’s endemic style perfectly, from light and airy to the powerhouse sounds of much larger groups. As my wife put it, “trust David to make a five piece band sound like a full orchestra.”

He faithfully recreates the actual sounds of the originals without the sort of latter day stylizing that can sour memories for us old timers. A tough and exacting director to work with, he spares no effort to get it right, and it shows. Nor does he make it easy for the cast; I could swear we heard eight part harmonies during Blackbird and Time of the Season, and the finale group numbers had all the power and complexity of a full blown choir.

David also has a knack for placing just the right singer in his or her perfect song. His cast rose to the challenge, doing so perfect a job of becoming those halcyon wonders that I was midway through the first set before it dawned on me that, astoundingly, none of these singers were even alive when this stuff was new.

The cast comprises what is now called a show choir, trading off leads, backup and choral numbers while dancing nonstop. “Glee” has nothing on this troupe. Each a polished and powerful singer alone, they meld flawlessly in chorus.

James Padilla, who nailed Donavan to a tee on “Mellow Yellow,” repeatedly filled the role of handsome front man, a sort of Mick Jagger meets James Dean. Sporting an almost Dana Carvey look, Jeremy Adams did justice to everything from Herman Hermits’ “I’m Into Something Good” to the Beatle’s “Ticket to Ride.” Jesse Smith was completely believable in the cool guy role on songs like “Wild Thing.” Rounding out the men was Matthew Dela Cruz, the talented boy next door you brag about knowing when his group makes it big.

The women, if anything, were even more impressive. Alicia Mendez – think Twiggy, but with a better figure and vastly more talent – kicked things off skillfully channeling Petula Clark on “I know a Place,” then hit home again with versions of The Seekers “Georgy Girl” and Lulu’s famous “To Sir With Love.” Alison Monda started strong and sassy on Dusty Springfield’s “Son of a Preacher Man,” then in act two morphed into that achingly sensuous girl who always got invited to dance on stage with the band. Powerhouse vocalist Stacie Calkins, undoubtedly the best torch singer in this area and well beyond, brought us to tears, literally, with a gut wrenching version of “You Don’t Have to Say You Love Me.” Jenny Shotwell, whose very talent answers the question “what happens when you turn a well trained opera singer loose on pop music,” dialed it down for the coy “My Boy Lollipop,” then let loose with her own show stopper on “You’re My World.”

And the dancing! There’s no set as such, and no props, but choreographer Amy Sennett-Starner recreated a range of moods with just movement. She hit all the old hokey dances spot on, recreated the dreamy acid and stoner feel during the psychedelic era songs, and brought back the sexual abandon of the free love era in the second act. Christina Barrigan provided excellent support with lighting that ranged from the stark spots on early groups to evocative kaleidoscope swirls and subtle ranges of color for acid era music. Like all really good lighting, you don’t so much notice it as feel its effects. Adding to the look were Julia Evanovich’s absolutely perfect period costumes, fitting both the musical eras and the personalities of the various characters the actors created.

You get the picture. This may well be not only the best theatre, but the best concert you’ll see in a long time. To borrow a phrase from the era, run, don’t walk, to get tickets for this one. Trust me; you do not want to miss this show.
Posted by Alec Clayton at 9:12 AM

This show rocks! There are many numbers that brought the audience to their feet and there was lots of singing along with the cast. This is a terrific show!

Is there a story or is it just a concert?

Another reader said: There is a story through the songs. It is telling the story of Britain's working class and reflects what was happening with the younger generation during the 60s. Go see this show if you love the British rockers of the 60s!!

I asked Michael and he said: If there is a story it escaped me. There is no dialogue per se; only songs and lyrics back to back. However, there is a theme and a timeline, which is considerably more than most mere concerts offer.

The theme is the so-called British invasion that irrevocably altered the music scene in the US while simultaneously reflecting (some would say influencing) the socio-political changes happening during that period. The musical timeline begins around 1964 and proceeds more or less chronologically through the early 1970s.

The first set (they call it act one) has songs about love, loss, feeling down and feeling good. Act two, after the intermission, introduces songs that reflect the growing psychedelic influence, the free love era and the peace movement. All that may not matter, for even if you don't know the cultural history that spawned these songs, you will definitely feel the changing moods they represent.

For the record, I was a teenager in 1964 and remember every one of these songs, my wife, somewhat younger, remembers only some, but my son was born more than a decade after that period ended. We all, perhaps for very different reasons, enjoyed the show immensely.

Really boring...especially the second half. It looks like the actors are making fun of the 60's instead of recreating them. A nice try, but with such a young cast...it's just not worth it. Buy a 60's music collection instead!

Surely all these comments from "anonymous" are not from the same person.

I thought everything was fantastic - the singing, the dancing, the musicians and the arrangements. Well done!