Susan Aurand and others at Childhood’s End 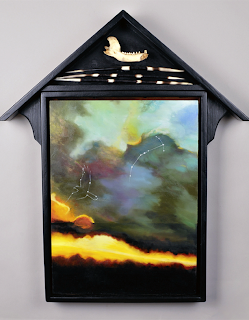 While driving past Childhood's End Gallery too quickly to get a good look through the window, I spotted some house-shaped boxes on the wall that were very colorful. My first thought was, "OK, birdhouses - cute and kind of trite, but at least they're brightly colored."

First impressions of art are often misleading. When I went back the next day to take a closer look (which I wouldn't have done if something hadn't grabbed my attention), I was surprised to see the birdhouses were mixed-media constructions with oil painting on panels by Susan Aurand, a longtime arts faculty member at The Evergreen State College. These pieces are much different than anything I've previously seen by Aurand, and they are much better art than I first suspected. In fact, they may be the most inventive art I've seen from her.

I counted 11 birdhouses (I use the term lightly; they're wall-hanging sculptures that look like birdhouses to me). Each is approximately 18-to-20 inches tall and about a foot wide. They are relatively flat wall hangings shaped like houses with paintings and objects attached. The edges are either black or natural wood colors, each has painted flat panels in front, and each has a peak roof with various objects either painted on or attached to the eaves. The paintings are mostly landscape scenes or paintings of grasses, feathers or clouds. The attached objects are such things as feathers, sticks, rocks and glass. Many of them look like items seen in Native American carvings or like the collected oddities seen in Joseph Cornell sculpted boxes. There is definitely a strong affinity for nature in these pieces and a feeling that they are almost shamanistic.

And the colors glow like embers in a campfire. Brilliant sunshine colors - mountaintops at sunset or streaks of sunlight bursting from behind stormy clouds in blazes of celestial fire.

The objects and the imagery may verge on the cliché, but they are finely crafted and beautifully painted, and there are some unique combinations of objects that are fun to contemplate.

"Dwelling Places I" is a black frame house and within the eaves there is a bird's nest built of sticks with golden eggs in the nest. A stormy sky with a fiery sun is painted on the flat panel below, and right in the middle of the sky is a shelf with a single golden egg on it, as if it is the golden jewel amongst the golden eggs.

In "Dwelling Places II" a jawbone and three feather quills rest in the space under the peak of the roof, and on the flat front panel is a painting of clouds and sun with the diagrammatic drawing of two constellations, one in the shape of a bird.

"Leaving Ohio" is a brown frame house with a nest of twigs and the cut-out silhouette of a bird flying away from the nest. There is a set of doors in front covered with painted stalks of wheat or grass. The doors open to reveal a painted backdrop of feathers and a tiny little house stuffed with grass or straw. This is one of the best pieces in the show.

Also showing are a number of linoleum block prints by Mimi Williams, a number of playful and decorative batiks by Lisa Kattenbraker and segmented and turned-wood bowls by John Shrader.