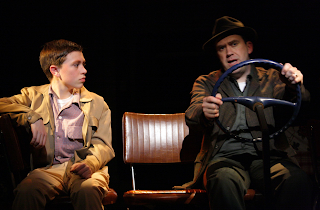 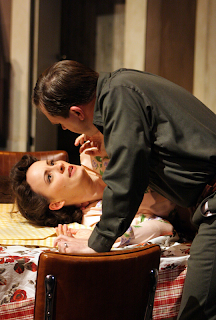 In a world in which priests molest little boys, in which teenage boys and girls post videos on social network sites of their friends getting drunk and having sex, in which kids take automatic rifles to school and mow down half their classmates it should not be too difficult to envision a man as emotionally crippled – and crippling – as Roddy Stern’s father, Archie. Archie is the father in Israel Horovitz’s semi-autobiographical play “Unexpected Tenderness.”

This is the third Horovitz play Harlequin Productions has done in as many years. Like the others – “Sins of the Mother” and “Six Hotels” – it rockets rapidly between outlandish humor and extreme emotional agony. People who cannot take riding an emotional roller coaster should not see this play.


In an awe-inspiring acting tour de force, Jason Haws plays the grown-up Roddy narrating the story of his youth, and he plays his own father, Archie. The adult Roddy looks back on events in his youth in 1953 as his family struggled to deal with the unpredictable behavior of his father. When we first see the father he seems to be a good natured and loving husband and father. Quite charming in fact, and clearly in love with his wife, Molly (played by Kate Parker). Even as they grow into middle age with teenage children and taking care of elderly parents, they remain tenderly romantic. They talk and giggle late into the night, dance with each other in the kitchen, and kiss so passionately you get the feeling they’re about to make love on the kitchen table right in front of the whole family.

But early on Archie gives hints that their family life is not so charmed as it might first appear. When it is time for him to go to work, he can barely force himself to leave for fear of what his wife might do while he’s gone. Suddenly Archie is revealed as a pathologically jealous, controlling and very creepy man.

Also very creepy is Willie (Aaron Hobbs), the mysterious man who works with Archie but is never allowed in their house. Local theater-goers will remember Hobbs from his outstanding performance in “The Complete Works of William Shakespeare (Abridged)” at Olympia Little Theatre – a performance for which I named him “Best Comic Actor 2009” in my annual “Critic’s Choice” column. In this show he is not so likeable. He plays a loud, boorish, obnoxious and dangerous man, and he plays him very believably. We’ve probably all know people like Willie and hope we never run into them again.

There are two excellent young actors in the roles of the Stern children. Katie Griffith as Sylvie and Jackson Jones as young Roddy are each about the age of the characters they play, meaning early teens, and they each do a very good job with their roles. The cast is rounded out by Walayn Sharples as the grandmother and David Wright as the grandfather. Wright convincingly stutters and shakes with an illness with symptoms like Parkinson’s. Overall it is an excellent cast, well directed by Scot Whitney.

The play is organized in an odd manner. The first act is all of a piece with the action in the Stern home flowing smoothly from scene to scene. The second act is more episodic and disjointed with first a scene almost out of context with Willie, young Roddy and Archie in Archie’s truck, and then a dialogue between young Roddy and his grandmother, a horrifying scene between Molly and Willie with an even more alarming intervention by Archie, and then back to the big family drama. These slightly disjunctive scenes mirror Archie’s psychological and emotional states.

An afterthought
Every time I see a play at Harlequin I think about saying this: The essays Artistic Director and co-founder Linda Whitney writes for the programs constitute some of the best expository writing published in the South Sound. I thoroughly enjoy her essays.