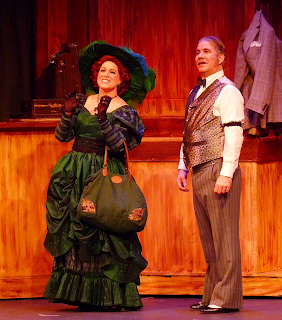 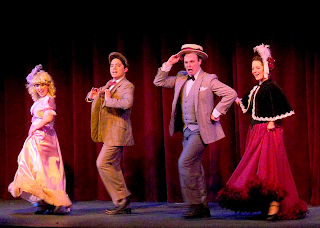 One of the more iconic moments at the end of the so-called Golden Age of musical theater was Dolly Levi’s majestic entrance to the title tune of “Hello, Dolly!” But it is not Dolly’s big entrance or the song’s even more dramatic reprise in the finale that lights up the stage in this perennial favorite. It’s not even the story of her conniving to win the heart of Horace Vandergelder (Dan Engelhard).

It’s the secondary story of Vandergelder’s clerk, Cornelius, and his sidekick, Barnaby, and their comedic love affairs with Mrs. Molloy and her employee, Minnie. Matt Posner as Cornelius provides the spark that ignites the Tacoma Musical Playhouse production of “Hello, Dolly!”

Posner’s voice, his expressiveness in both body and face, and his absolutely perfect timing define excellence in musical theater. And his cohorts in this quartet of silly young lovers are also outstanding. Leischen Moore is delightful as the widow Molloy, and she sings beautifully. Brad Walker as Barnaby and Dannielle Krehbiel as Minnie are both sweet, funny and engaging.

The story line of “Hello, Dolly!” hardly needs explanation. Dolly (Diane Bozzo) is a matchmaker and a larger-than-life character. She’s supposedly going to match the rich Vandergelder, who doesn’t really want to get married but does need a housekeeper, with the widow Molloy, who doesn’t particularly like him and who quickly becomes smitten with Cornelius. But, of course, Dolly’s true intent is to get Vandergelder to marry her.

The story is silly and outdated, but there is some great singing and dancing with the kind of big production numbers TMP excels in and musical theater audiences love.

One of the funniest and most joyful song-and-dance numbers comes near the end of Act 1 when Cornelius and Barnaby pretend they don’t know how to dance and Dolly teaches them how. Posner and Walker have some great comedic moves here. Then Bozzo steps in front of the curtain to do an outstanding job on the opening refrains of “Before the Parade Passes By,” which is a much better song before all the other singers and dancers come on to make it into a celebratory march.

The big restaurant scene in Act 2 – ostensibly the comic highlight of the play – is just stupid. The jumping back and forth from Dolly and Vandergelder’s private dining room to the private dining room shared by Cornelius, Barnaby and their dates is like an insipid precursor to the inspired insanity that was done many years later in the final of each episode of “Laugh In.”

Fortunately, that is followed by the best vocal solo in the play, Posner’s “It Only Takes a Moment,” which is Cornelius’ love song to Mrs. Molloy.

Bozzo is outstanding in moments, but also uneven in her portrayal of the title character.

While the set is uninspired, the costumes by Joan Schlegel are magnificent, with great rich colors in the women’s gowns. The orchestra directed by Jeffrey Stvrtecky is as good as ever, and John Chenault’s lighting is up to his usual high standards.