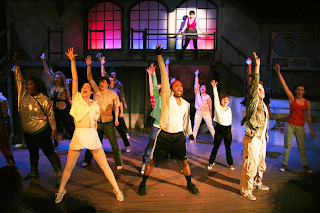 The News Tribune, May 20, 2011
Producing “Fame” gives Capital Playhouse an opportunity to trot out the considerable talents of their “Kids at Play” graduates in a rousing musical featuring a crowded stage of mostly adolescents.

The talent displayed by some of these teenagers and young adults is amazing. I can easily picture a few of them going on to much wider success in musical theater.

But the stage play by Jose Fernandez is a less-than-successful adaptation of the hit movie from 1980. While the music is infectious and production values are outstanding, individual performances range from incredible to mediocre.

There are a few too many clichés and worn-out jokes, such as when Carmen (Sierra Campbell-Unsoeld) says the three things she cares about are “me, myself and I” or the repeated joke about the “seafood diet” (see food, eat it).

Fernandez can’t be forgiven for writing those lines. There also are scenes of overwrought emotion that are not properly developed.

But perhaps that can be forgiven because it’s all about the singing and dancing, which is marvelous in moments.

Campbell-Unsoeld electrifies the production. She is comfortable on stage with the poise of a veteran actor. She is saucy and self-assured. At one point, Carmen says she wants to be like Anita in “West Side Story,” and Campbell-Unsoeld’s Carmen reminds me a lot of Rita Moreno’s Anita in the film version of that show. Toward the end, after she goes to L.A. and returns strung out on drugs, she captures the look and nervous twitches of an addict so well that it is painful to watch.

Ryan Tunheim is well-cast as the romantic lead, Nick Piazza. He has a soft and well-controlled voice, and his love ballads with Serena (Bailey Boyd) are sweet and sincere.

Boyd is outstanding. She plays a mousey, squeaky-voiced, shy and impulsive girl who is strong and commanding when she sings. Her rendition of “Let’s Play a Love Scene” is lovely, her solo on “Think of Meryl Streep” is poignant, and her reprise of “Love Scene” in duet with Tunheim is very moving.

Also outstanding is Holly Harmon as Miss Sherman the English teacher. Her rendition of “These Are My Children” is moving, and her acting is convincing.

Of special note is Antonia Darlene, whose character, Mabel, is a bit silly and adds little to the play until her one big solo on the comical “Mabel’s Prayer,” a gospel-style tune that brings the house down. Wow, can she ever belt it out!

Carolyn Willems Van Dijk’s ballet talents are on full and delightful display throughout, and she is very expressive.

On the downside, DuWayne Andrews Jr. appears stiff and unnatural in the role of Tyrone, the lead male dancer, and Jason Hodges almost overdoes it as the outrageously pretentious Joe Vegas.

The set by Bruce Haasl is up to his usual high standards, and the movement of rolling set pieces (typical of Capital Playhouse) is beautifully choreographed, albeit with unnecessary set changes. Matt Lawrence’s lighting effects are electrifying.

Despite the uneven script, this production of “Fame” provides an exuberant, toe-tapping evening’s entertainment.