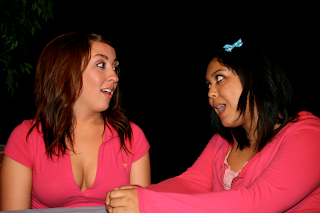 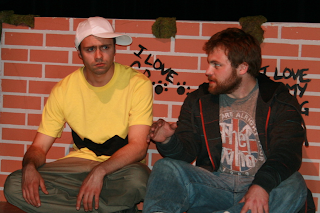 Director Don Welch and the theater students at South Puget Sound Community College deserve a lot of credit for taking on such a risky production as Bert V. Royal’s biting satire “Dog Sees God.” It is a play that will make you laugh and make you cringe and shudder.


Imagine Charlie Brown and Lucy and the other kids from Charles Schultz’ comic strip “Peanuts” years later. They’re teenagers now, obsessed with sex, drugs and booze. Issues such as bullying and gay bashing rear their ugly heads.  Just as when they were six years old, these almost-grown kids are given to philosophizing on God and the nature of the universe.

The ads for the play teasingly state: “Drug use, suicide, eating disorders, teen violence, rebellion and sexual identity collide and careen toward an ending that's both haunting and hopeful.”

That’s putting it mildly. The cursing is over the top. There is also violence that is depicted so realistically that it is very hard to watch. This play presents a strange mixture of humor and harsh realism with, unfortunately, a few too many bad jokes and clichés. Early on in the play I thought they had captured the teenage jargon and mannerism well, but then I began to realize that perhaps what I was seeing was not so much realistic portrayals of teenage life as depictions of life as viewed through the lens of movies about teenagers. I could have been watching stoners and valley girls from the ’80s.

In spots this play is as clever as its palindrome title, and some of the many references to “Peanuts” are also witty. Nobody is specifically identified as a character from the popular comic strip, but CB’s initials and his immediately identifiable yellow shirt are unmistakable. Remember Schroeder, the kid who played a toy piano with a bust of Beethoven? His avatar in this play is a kid named Beethoven who plays the piano. Linus is no longer there, but there’s a kid who used to carry a security blanket like Linus and another kid who always had a cloud of doom following him – you get the idea. The cleverest take on the “Peanuts” character is Van’s Sister, based on Lucy van Pelt of “The Doctor Is In” fame. She is an inmate in an insane asylum who says (admitting it’s a cliché) that there are just as many crazy people on the outside as on the inside, and from her hospital room she continues to dispense wise psychological advice.

There are numerous themes, plots and subplots, but the overriding theme has to do with the one kid who gay and is tormented by the other kids. I don’t want to reveal what happens to him, but suffice it to say it’s a tragedy. Such things happen all too often, and sometimes the tragedies that take place on stage, no matter how dramatic, are dwarfed by similar tragedies that happen in real life; and yet, the depiction of a gay bashing in this show seems contrived. That statement, as many readers of my columns know, comes from someone who has experienced this story personally. Nevertheless, there’s an old rule of thumb in literature that says just because it happened that way in real life doesn’t make it believable in drama.

The actors are relatively inexperienced, but well directed, and they all seem comfortable on stage.
James Asmus is excellent as CB. He is sincere, believable and natural. Too bad he couldn’t have been bald headed and a little bit chubby.

Alex Bergman handles the tough role of Matt well. Matt is obnoxious and sexist, and has a violent temper. The best thing I can say about Bergman’s acting is that I could not stand Matt.

Hannah Tripp as Marcy and Meagan Develos as Tricia, as a couple of airheads, are delightfully ditsy, even if their characters are too Valley Girlish.

Jennifer Woodruff turns in a fine bit of restrained acting as Van’s Sister. Her timing and speech patterns were spot-on.

Kortney Molle plays CB’s spaced-out sister moved with grace but I didn’t find her character to be particularly interesting.

Finally, Michael Korosec as Van captures the gestures and speech patterns of a typical stoner, but after his initial scene the character becomes predictable and boring.

There are glaring faults with most of the characters, but in each case it is the fault of the writer and not the actors. I can see why this is an “unauthorized parody” of “Peanuts.” I doubt seriously Schultz would have given it his blessing.

Due to strong language and sexual themes, the play is recommended for mature audiences.

Alec
Could you credit me for the photography? Thanks
Laura@TheCyberTimesMedia