I’d like to share a few video clips from the first run-thru for the staged reading of my screenplay “The Backside of Nowhere.”

But first, a warning. Someone asked if it was suitable for young children. No, it’s not. I wrote it for and about adults. The characters talk the way adults talk. What’s worse, there are flashbacks to when David and Sue Ellen and their friends were teenagers, and they talk like teenagers. David and Sue Ellen (Bryan Bender and Jennie Jenks) remember their first rather disastrous sexual encounters and talk about them in detail.
And Pop, the crusty old patriarch of the Lawrence clan, (Scott C. Brown) peppers his speech with most of the seven deadly words you can’t say on TV.

A few other thoughts: First, the three Ms - Melissa (Deya Ozburn), Murabbi (Mark Peterson) and Mary (Christine Goode) - do not have speaking roles in these clips, but they do have plenty to say. Melissa in particular has a gut-wrenching speech that I couldn’t include because it would give away too much of the story line. Also, don’t let the absurd humor mislead you; it is a dramatic story, but as is true in life, drama and humor go hand-in-hand. 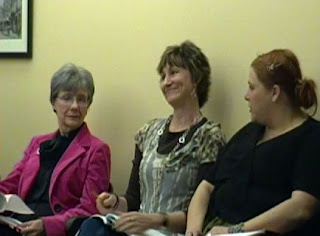 Pictured from left:Syra Beth Puett as Shelly,
Jennie Jenks as Sue Ellen and Christine Goode as Mary.
I was blown away by these actors. They had skimmed the script to highlight their parts, probably just looking for character names without actually reading much of it, and they had not had a chance to discuss it with each other or with the director. Yet they nailed their parts on the first reading, even convincingly playing multiple characters with different voices and getting the Southern accents. (Having grown up near where the story is set in South Mississippi, I expected to have to coach these Northwestern actors on the accents, but what little coaching there was came from Syra Beth Puett, who also grew up in the Deep South and plays the part of Shelly.

One final note: The director, Scott C. Brown, did most of the casting, with a few suggestions from me. He also reads the part of Pop Lawrence and “Fat Man.” Somehow Scott started calling “Pop” “Pops,” and that sounds so much better and seems to fit the character so much better that now I want to go back and do a search and replace all in my script.


Watch the video clips
Posted by Alec Clayton at 10:36 AM