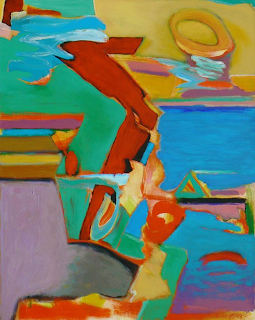 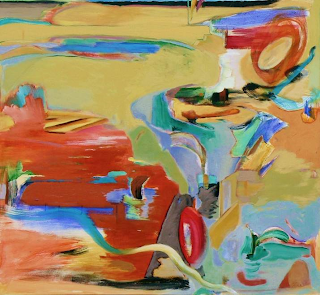 Mavi Contemporary Art has a stable of about 20 artists whose works rotate from month to month. I may be wrong, but it seems like three of them, William Turner, Michael Croman and William Quinn, are in almost every show. These three are again featured in Mavi's latest show. To be more accurate, Turner is featured and Croman and Quinn have a strong presence.

Turner's paintings are his latest. I didn't make a note of the dates, but those I did notice were all done this year. As with his previous works, they are large, colorful abstract paintings that relate to landscape, with oddly shaped patches of color that clearly reflect the look of trees, water, mountains and sky. Where the new work differs from Turner's previous work is that these paintings are bigger and more energetic, and with more intense color.

It looks like he is pushing himself to take more chances and be more spontaneous, and that's a good thing. What's not so good is that with a couple of exceptions, the new work is more jarring, i.e., less harmonious, than his earlier work. The pieces do not lock together as well. The paintings read as a jumble of parts rather than a unified whole. Perhaps that's a trade-off worth making, and maybe in efforts to come he will be able to compose his work more harmoniously while retaining the new spontaneity.

The best paintings in the show are "Hanging Ten" and "There is Always Time for Red." Both are five feet tall and alive with brilliant colors from every point on the color wheel. "Hanging Ten" is more classically balanced than most of Turner's paintings, with everything balanced on either side of a bright red zigzag that runs down the middle of the canvas like a canyon or a road cut through with mountains on one side and ocean beaches on the other. On the left are large areas of blue and light violet with numerous accents in many other colors. The right side is similar but with large fields of yellow and blue. There is water and a  horizon line, but what would logically be sky above is yellow with a strange circular shape like something etched into the face of a cliff.

The intense colors fight each other, but are held in check by the carefully composed juxtaposition of shapes. It's a good balance of a spontaneous slap-dash of paint and more carefully thought-out composition (although I suspect the composition was more intuitive than planned.)

"There is Always Time for Red" has less jarring colors, but is still vibrant with hot red, violet and orange, and a scrubby white and gray area below a delicate wash of red and orange.

In the vault - a separate gallery within Mavi that is actually an old bank vault - Michael Croman is showing 11 medium-sized landscapes in a style derived from 19th century landscape artists, but with the more modern addition of veins of tiny drips and runs of turpentine eating through the oil paint. It's not a style of painting that I like, but the complexity of detail is admirable.

Also showing are sculptures with a clear Native American influence by William Quinn. Most are strong, totem-like standing figures. The strongest work of all is a piece called "Metamorphose," which is a jumble of aspen limbs painted stark white, black and gray. Verbal description doesn't do it justice. It's a work that packs a wallop.
William Turner