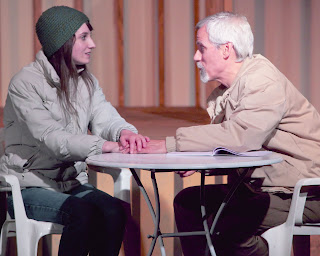 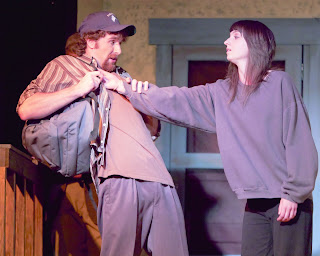 Top: Catherine (Danelle Jaeger) sitting across the table from her father (Paul Duke).

“Proof” takes place entirely on the back porch of a Chicago home just after the death of Robert (Paul Duke), a brilliant mathematician who wowed the academic world at a young age, then devolved into unproductive insanity. It revolves around his daughter Catherine (Danelle Jaeger), who quit college to spend years caring for him, and still talks with him while trying to sort out what’s to become of her own interrupted life, a technique used to reveal her father’s character. She knows she’s inherited some of his mathematical genius, but fears that the attendant insanity is also waiting in the wings.

Rounding out the four person cast is Hal (Mason Quinn), the protégé of the deceased, and Catherine’s contentious sister Claire (Annie Coleman) who shows up from NYC to settle the family affairs. Though ostensibly there to be helpful, both manage to question Catherine’s veracity, competence and even her sanity in the course of a few days.

The opening scene is the weakest, but things get quickly better. Whether from acting or a directing decision, Duke’s Robert seems more like a crisp CPA than the unkempt, half-mad math genius the dialogue leads us to expect. Duke redeems himself in a second act flashback, though, as his increasingly crestfallen daughter watches him rapidly decay from hard-at-work sanity to excitedly eager delusion.

Jaeger is spot-on as Catherine, with voice, body language and subtle facial expressions perfect throughout the wide range of emotions this demanding role exacts. She adroitly takes us from pain induced ennui, a result of her father’s condition and her role in it, through distrust followed by the rush of budding attraction to Hal, then betrayal, resignation and finally hope. It’s a heady ride, and she steers it skillfully.

Quinn plays Hal, the geeky young math professor, with all the awkward tentativeness of the shy suitor he soon becomes. His scenes with Catherine are delightful, crackling with the gentle tension of irresistible attraction and the gawky body language of self-conscious affection.

Coleman’s Claire is perfect as Catherine’s older sister, and their chemistry together is pure magic. She thoroughly nails that familiar familial mix of caring and caretaking sprinkled with barely suppressed resentment of “you had it easier.” Coleman hits all the marks, from efficient take charge elder sister through a convincing hangover, realistically laced throughout with the edge of New York superiority so common to those who’ve adopted the city. With flawless timing from both of them, they come off as real as two sisters can be.

Frankly, it’s a good thing the acting is so compelling, because the cast gets little help from the technical side. The lighting was mediocre at best, adding little and often leaving actors literally in the dark. Dark dead time between scenes, a stark contrast to the play’s excellent pacing otherwise, was another weakness. Ditto for the set, uninspired and with flaws that were almost distracting. Costumes, however, were excellent, with the possible exception of the too neat Robert (costumes by Sam O'Hara). They were authentic for the people portrayed and expertly reflected, as our clothes often do in real life, the changing moods of the characters over several days.

When all is said and done, a play like this is not about trappings, but rather good acting and the convincing interplay of real personal interactions. On that score, “Proof “ gets a very solid A. Even if you’ve seen other productions of “Proof,” as most of us have, make time to see this one. It’s worth it.

I wouldn't have given away a certain plot point, but other than that, I agree with every word of this review. I've directed Proof myself, so I'm hard on other productions of it--but this one is really quite good.