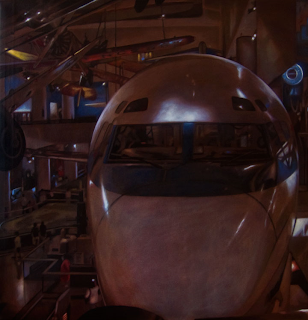 The Weekly Volcano, June 23, 2011
You may know Peter Sheesley from the painting demonstrations he did at Tacoma Art Museum in connection with the Norman Rockwell exhibition.

I have a confession to make: I was not impressed with what I read about Sheesley, nor with what I saw on his website. I thought of it as realism and nothing more than a show of painting virtuosity. But when I saw Sheesley's show, Science and Industry, at Fulcrum Gallery, I realized there was much more to him. I also realized that Sheesley's work - especially dark and moody pieces such as these - do not reproduce well, on paper or online. What you see in print here is a pale reproduction of what you can see in the gallery.

Sheesley's paintings in this show are taken from candid photographs snapped in Chicago's Museum of Science & Industry. The key word is "candid." None of the people seen interacting with each other and with the exhibits in the museum are aware that they are being photographed. For the most part they seem unaware of each other as well. There is a strange voyeuristic quality to these paintings and an equally strange disconnectedness among many of the people pictured.

The other unique qualities that set these paintings apart from the run-of-the-mill realist paintings are his depiction of light in darkness and the futuristic quality. These are not spaceships from the 24th century, they are airplanes, some quite old, on display in a museum, and yet they look futuristic - sleek, shiny and otherworldly.

Pictured here is one with the unassuming title "Airplane." It's a head-on view of the nose and cockpit of an airplane of nonspecific vintage. It is so sleek and smooth that it looks like a helmet worn by a spaceman. Behind it, hanging as airplanes do in museums, is an old crop duster. The angles of the wings combined with the sleek roundness of the newer airplane create an intriguing linear design and break up the space in interesting ways.

But it is the lightness within darkness that really sets these paintings apart. Everything is in almost a monotone with dark burnt sienna and ochre reminiscent of sepia-tone photographs and highlights of soft blues and yellows and violets where light reflects off shiny metal surfaces and the clothes and faces of people meandering through the museum.

In "Control Room," the television monitor screens appear a softly glowing sky blue when seen from across the room, but are seen to be very light pink and purple when seen up close. The workers at their consoles are barely visible in the darkness.

In "Crowd," random groups of people seen from a distance and above, as if viewed from a balcony, are spots of softly luminous light in tones of yellow and blue. There is a strong sense of slow movement as these people negotiate the open space in a kind of ballet.

There are six large oil-on-canvas paintings in the front room of the gallery. Each is a study of light within darkness. They draw you in through mood and mystery and then you gradually begin to discern the interesting details of barely visible people and machines.

In the back gallery there are five smaller paintings that are similar but with less darkness. One of these, which gallery owner Oliver Doriss said drew the most attention from the opening crowd, is a little painting of a woman in a blue dress sitting in an airplane seat. Sheesley says he was influenced by Lucian Freud, one of the great figure painters of the 20th century. That influence is clear in this painting.

This small show is quite mesmerizing. I definitely recommend it.
Peter Sheesley: Science and Industry