from the Weekly Volcano blog Spew 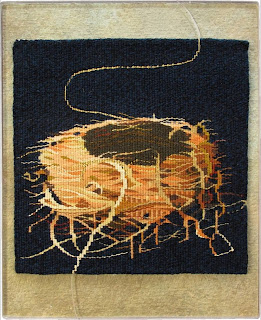 “The Points in Between” by Jean Pierre Larochette
The latest show at the Handforth Gallery in the Main Tacoma Library is a traveling juried exhibition of tapestry featuring small works from tapestry artists from all over the world, including at least three artists from Tacoma and Olympia - Cecelia Blomberg, Margo MacDonald and Mary Lane, who are also featured in the current show at Brick House Gallery in Tacoma (watch for my review in the Weekly Volcano due out Thursday, .June 16).

All of the works are about the size of a notebook. Most are pretty traditional and technically well done - at least to my eye; I'm no expert on tapestry but view them as I would view paintings.

Now that I've read some of the statements in the nicely designed catalog that accompanies the show I wish I understood more of the technical aspects. Artist's statements in the catalog talk about warps and multiple setts (Mary Rawcliffe Dolton talking about her piece, "Bumps in the Road") and focusing on "the warp and weft grid by using hatching and soumack..." (Joyce Hays writing about her piece "Conciliation Fall.") I don't understand those terms, but I like the look of their pieces.

"Bumps in the Road" is one of my favorite pieces. It looks like a little wall hanging sculpture. It is a kind of monolithic vertical form that zigs and zags with bright red and blue triangles as it crawls up the wall. Hays' "Conciliation Fall" is a luminous and delicate pattern of three bands of gray and white marks on a field of tan.
Another piece a like a lot because of the way it breaks out of the traditional rectangular format is "Going Through the Motions" by Sharon Crary. It's a simply patterned abstract piece with folded cloth in patterns of variously hued greens over solid red background and wrapped with a red ribbon.

One of many other pieces that I like is "The Points in Between" by Jean Pierre Larochette, one of the few men in this show. It's a picture of a bird's nest on a black background. I like the strong color contrasts and the high energy of the twigs that fly out of the nest as if in an explosion.

About the three local artists in this show. First, congratulations. Being selected for inclusion in a show of international scope is a big deal.

MacDonald's "On the Beach" is a simple little picture of a canoe sitting on a beach with its oars out as if plowing through water even though the boat is not on the water and there are no paddlers to work the oars. It doesn't have the impact of some of her larger pieces in the show at Brick House, but it is very sweet, due to the soft colors, and it is nicely designed.

Blomberg has a piece that is similar to MacDonalds. It's called "Between the Birches." It pictures a yellow canoe in dark blue water as seen through a stand of birch trees on the river's edge. The regularity of the spacing between trees lends it an emblematic look. As in MacDonald's picture, there's no one in the canoe.

Lane continues in this show the theme of her works in the Brick House show with a peach colored dress on a floral patterned background. The patterns are not as intricate, which I think works better, and the colors are softer and more harmonious. I particularly like the soft lavender flowers on the peach colored dress.
Passages: Small Tapestry International 2 runs through July 1.
Posted by Alec Clayton at 2:59 PM