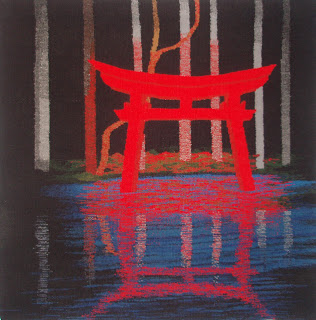 The latest show at Brick House Gallery - Warped, Beaten and Hung - is a showcase of works by members of Tapestry Artists of Puget Sound. I think they could have called it Cecilia Blomberg and friends, because Blomberg's work dominates the exhibition.

The showstoppers are two large works by Blomberg: "Rising Tide" and "The Milkmaid." "Rising Tides" pictures rows of huge concrete block steps leading down into water, with the lowest row under water, creating an illusion of transparency through the use of subtle color changes, something that can't be easy to do with woven thread, which cannot be physically transparent. The viewpoint is as if one were standing on the top row of steps looking down, so that it becomes an almost totally abstract design of repetitive shapes with a very soft balance of contrasting and harmonious shapes and colors. In purely visual terms this is the strongest piece in the show.

"The Milkmaid" stands out due to its large size and the ghostly appearance of the central figure. I was told by gallery owner Peter MacDonald the image was taken from an old double-exposure photograph. It pictures a milkmaid walking forward from shaded woods with, below her, another picture of the same milkmaid and a cow. It is a successful piece because of Blomberg's smart color choices - predominantly soft grays with hints of yellow and brown - and due to the unique imagery. It's an old faded photo in thread.

There are also a couple of interesting little abstract and semi-abstract pieces by Blomberg that use threads that extend beyond the surface.

Another large tapestry that stands out with immediate impact is "Tori" by Margo Macdonald. This is an intensely colored picture of a Japanese gate standing in and reflected in water. The brilliant red of the gate is on fire against the deep blue of water.

Another work that is very intriguing is "Dearest" by Inge Norgaard. I was told this piece depicts a mythological tale. It certainly looks like a depiction of mythology, although I'm not familiar with the particular story. There is a strange naked woman squatting down in the woods talking to a deer, which is standing upright on its hind legs. The setting is idyllic. The unexplained hints of narrative are intriguing. The drawing looks primitive. The woman with her oddly flattened and squared-off breasts reminds me of line drawings by Matisse and Cézanne.

Also very interesting are two small pieces by Mary Lane. Both are of women's dresses presented as flat patterns on an equally flat and patterned background. They remind me of some of Jim Dine's many famous paintings of his bathrobe. One of Lane's tapestries is of a summer dress over a floral pattern and the other is of a dress printed with patchwork quilt patterns in various shades of brown over a black background with line drawings of dress patterns. The resonance between a traditional woman's media (tapestry) and a similarly typical woman's occupation (dressmaking) is obviously intentional yet visually subtle.

This is a very interesting show with a wide variety of styles and methods of art created from wool, cotton and other cloth materials. The show runs concurrently with a similar show at the Handforth Gallery at the Tacoma Main Library, Passages: Small Tapestry International 2, featuring small tapestries from all over the world. Works by at least three of the local artists featured in the Brick House show can also be seen in the show at the library. They are Lane, MacDonald and Blomberg.
Warped, Beaten and Hung