"Contents of a Dream" 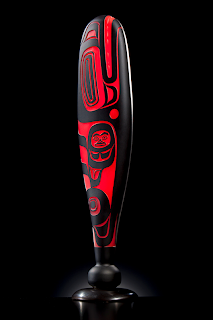 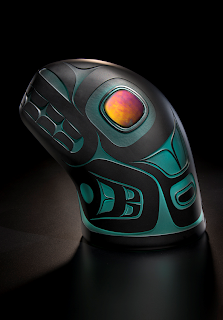 The Weekly Volcano, March 30, 2011
If you missed Preston Singletary's big mid-career retrospective at the Museum of Glass last year, or if you saw the show and would like to see more of Singletary's works, this is your chance. The William Traver Gallery in Tacoma now has an exhibition of new works by Singletary called Contents of a Dream.

Singletary is one of the Northwest's most well respected Native American artists, known for creating traditional Tlingit art with contemporary materials, thus giving a modern cast to ancient art forms.

The glass sculptures in this show are all new, yet they look to me to be almost identical to pieces shown in the retrospective at MOG. I would probably have to see pieces from the two shows side-by-side to tell if there is any difference at all.

There is, however, one striking and significant difference - not in the works but in the way they are displayed. You see, Traver Gallery has windows, whereas the space where Singletary's work was displayed at MOG didn't; and that makes all the difference in the world. It makes a difference because his blown and sand-carved glass objects have incised shapes on the surface that are not transparent and not even, strictly speaking, translucent, but light can be seen through them. When backlit by the sunlight through the windows and the double glass doors, these areas glow with beautiful colors - brilliant turquoise and a fiery red typically combined with black and in some pieces black and white or sand colored and white.

There is one piece in black and white that when seen from a point of view facing the doors looks ghostly and almost vanishes as if seen though layers of gauze. You'd have to see it on a sunny day to get that amazing effect.

Singletary's sculptures are all of a modest size, approximately 20 inches in the lengthiest direction. Most of them are stylized or abstracted figures of ravens or fish or other figures sacred or culturally significant to Northwest Natives. They are simple shapes with elaborate surface decoration. They are abstract enough that it is hard to tell what they are. Some look like they may be birds or fish, and one in particular, called" Bright Eyes," looks like either a fish or a turtle.

Singletary's simplest sculputres are the most striking. "Bright Eyes," for example, looks like the head of a creature rising out of the water with black and turquoise markings and green eyes (the color of the eyes may vary depending on light and viewpoint). It is a powerfully dramatic image.

Also very dramatic are a number of fish or birds with a single red ball caught in their mouths. The contrast between simple and complex forms in these is very striking.

Another one that I like a lot is "Where the Soul Resides," which is a hollow cylindrical shape with heads in two directions. It is sand colored with the incised areas a soft, translucent white.

The least impressive are a few pieces that picture people riding on the backs of ravens. These illustrate Tlingit legends and probably have significant meaning to people familiar with their customs, but to me the figures look comical and out of context. Even if I knew the stories they illustrate they would still look like unrelated forms that do not work together well from a purely visual point of view. Despite this one criticism, I think the rest of the show is definitely worth seeing.