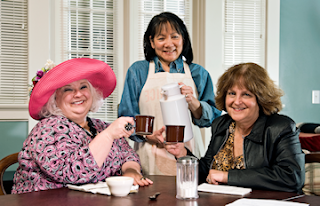 It’s always a pleasure to welcome a new theatrical company to town. The latest in Tacoma is Dukesbay Productions, and their maiden voyage is a live sit-com set in Tacoma. It’s called “Java Tacoma: Episode 37 Ashes to Ashes, Cup to Cup.”

Were there really episodes one through36? I doubt it, but what do I know? Maybe the first 36 episodes took place in another realm. But why, then, did their press release call it the first installment of a comedy series? Sly folks, these Dukesbay folks.

Now playing at The Trinity Fellowship Hall, 1619 6th Ave. Tacoma, “Ashes to Ashes” is all about Tacoma folks, and it takes place not in a traditional theatrical setting, but in a coffee shop setting. Small tables and chairs are arranged to suggest a coffee shop, with audience members seated, coffee and pastries in hand, to watch an original comedy series that’s all about their hometown. I’m told that one of the characters is a reporter for The News Tribune. I wonder what other thinly-disguised locals may appear.

“Ashes to Ashes” was written by Federal Way playwright Curtis B. Swanson. “Java Tacoma” is the continuing tale of three best friends who meet daily for hot coffee and even hotter gossip. The series is recommended for ages 13 and up, due to language and mature content.

“Java Tacoma: Episode 37” continues Friday and Saturday, March 11, 12, 18, and 19 at 7:30 p.m. Tickets are $15/person, which includes an assortment of coffee and tea, and locally-prepared pastries by Corina Bakery in Tacoma.

About Dukesbay Productions
Dukesbay Productions is a brand-new company founded by Tacoma theatre artists Randy Clark and Aya Hashiguchi Clark.  Their mission is to showcase the works of local playwrights and theatre artists of all ethnicities.  Java Tacoma: Episode 37 is directed by Randy Clark and features the talents of Mick Flaaen, Joseph Grant, Aya Hashiguchi, Betzy Miller and Laurie Sifford.