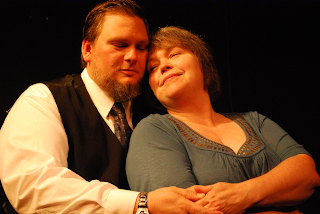 Pictured here are Chris Cantrell and Pug Bujeaud as the embattled couple Martin and Stevie in Edward Albee's “The Goat or Who is Sylvia” - one of the best plays of the year, which I reviewed for The Olympian and The News Tribune.

Lately I have been writing profiles of the four actors who are doing the reading from my novel, Reunion at the Wetside. Chris is the last of the four to be profiled.

Chris is a powerful dramatic actor, and no slouch at comedy either. Readers of my column in The News Tribune will remember that I have often raved about his performances.You may recall that I picked him as Best dramatic actor in my 2007 Critic's Choice awards for his role as Macbeth at Olympia Little Theatre and that in Rosemary Ponnakanti's recent "South Sound Stars" article he was named Best Supporting Actor (I chose all the award winners and Rosemary interviewed them).

I was thrilled when Chris accepted my invitation to be in the reading. He reads the part of Harry Drews, a crime reporter for the Wetside newspaper who never gets it right. The book is both a murder mystery and a love story. Throughout much of the book the mystery part is told through readings of Harry Drews' "Police Blotter" column. Harry doesn't actually show up until near the end of the book when he is revealed to be someone much different than you'd expect. In reading parts of Harry's newspaper column Chris breathes life into this character.

We never had a proper rehearsal prior to the reading at Orca Books. We had one short read-through without direction. The actors interpreted their characters as they saw them, and as the writer who created these characters I was amazed at how well they nailed them. I hope you'll come and see for yourself when we present another reading at Comic Book Ink in Lakewood.

A Q&A and book signing will follow the reading.
More information on the book including reviews and an excerpt for you reading pleasure at  http://www.claytonworkspublishing.com/Reunion.html
Posted by Alec Clayton at 9:17 AM