'Woman in Black' at Centerstage Theatre is dark, mysterious 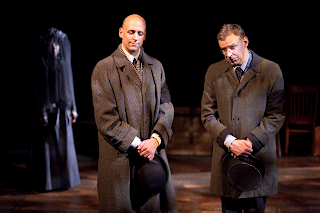 COURTESY OF MICHELLE SMITH LEWIS
Rachel Wilkie, from left, Daniel Wood and Vince Brady perform in “The Woman in Black” at Centerstage Theatre.

The Woman in Black” at Centerstage Theatre is an old-fashioned ghost story with exceptional acting from the two-person cast and spine-tingling special effects. It’s a simple story presented with heightened theatricality.

This gripping tale of dark terror begins on a comic note as Kipps, a dowdy and highly nervous solicitor, enters a theater to meet with an actor who is going to help him tell his tale.

The actor (played by Daniel Wood) wants the telling of the tale to be a theatrical presentation, but Kipps (Vince Brady) simply wants to tell his story to family and friends to gain some kind of closure before his horrible memories drive him insane.

His attempts at reading his story in a dramatic fashion are comically inept, as are the actor’s melodramatic attempts at directing him.

But soon they switch identities. The actor steps into the role of Kipps, and Kipps assumes the roles of everyone else in the story. With this change comes a change in atmosphere.

The tale becomes dark, mysterious and frightening as Kipps returns to the fog-enshrouded Eel Marsh House in the marshlands on the eastern coast of England, and there he relives the horror.

“The Woman in Black” is beautifully directed by John Vreeke, and is a technician’s dream, filled with exciting and mysterious lighting and sound effects and an almost bare, yet highly effective set. To credit all the great work from the technical crew and consultants, I would have to list everyone in the production crew, including set and lighting designer Richard Schaefer and sound designer Andrew Senna, with special sound effects from Harlequin Productions in Olympia.

In the wings stand two tall porticos, each with a small window. Against a back curtain, steps rise to a heavy wooden door. The only other set pieces are a few props, such as a couple of trunks and some chairs. Dramatic beams of night light – moonlight and flashes of lightning – shine through unseen windows and reveal a shadowy cemetery and later a child’s bedroom through a back curtain.

Brady and Wood, the only actors, are on stage through almost the entire play, and they are each outstanding. Brady displays great versatility as he goes from playing Kipps to playing other characters, including the taciturn carriage driver and village residents who refuse to talk about the mysterious woman in black. His posture and facial expressions and manner of speaking change to fit each character. Even such a simple matter as moving to the rhythm of a horse-drawn carriage, he does so convincingly that we almost see the horse.

Wood does not become various characters in the same manner, but as the actor he is comically over-dramatic and as Kipps his intensity is nerve-wracking as he tries to conquer his fear and solve the mystery of the woman in black.

No actor is credited for the role of the woman in black, but she does appear on stage. I’m pretty sure there were at least two people playing her part, and I suspect they were costumed stagehands.

Warning: There is a lot of heavy fog, and there are frightening sound effects including blood-curdling screams. It is probably not a good idea to bring small children to this play.