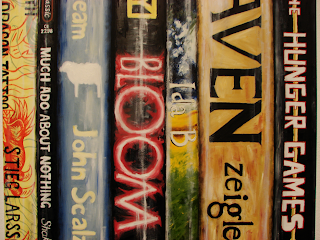 "Books Everyone Should Read" - a painting by an unidentified high school artist. Photo courtesy SPSCC

South Puget Sound Community College's exhibition of student art from area high schools surprised me. It was not a happy surprise. Maybe it's been too long since I taught high school art and maybe I no longer know what to expect from students, but I really expected the overall quality to be better. Not that there aren't a few very nice works.

The style and subject of the art also surprised me. It has been my experience that the most popular art forms among young artists are surrealism and art inspired by graphic novels and graffiti, but there is practically none of that in this show. Nearly all of the pictures in this show are of faces or figures. There are no abstract paintings, unless you consider a painting of a logo or crest or symbol (it's hard to tell which) an abstract painting. There are also very few landscapes and hardly any still life paintings or drawings.

For the students involved, it's not just a chance to showcase their art. The exhibit is a competition for students vying for a spot at the state art competition. And for gallery attendees, it's more than a viewing, as visitors get to vote for their favorite pieces. To keep the voting unbiased, they have labeled the work with numbers and no artists' names. When I went two people had voted, both for number 488, a picture of a cowboy silhouetted against a sunset. I voted for number 5-something, a Pop Art image of book covers on a shelf. There are six such paintings in the show. At first I assumed they were all by the same artist because they are all variations on the same theme done in almost identical styles, but after giving it some thought I decided they are probably paintings from a class assignment, which would account for them looking so much alike.

Whether by the same artist or different artists, these are among the best works in the show. In most of them the images are closely cropped so viewers can read only parts of the book titles or author names, thus turning them into semi-abstract paintings and creating a fun guessing game to figure out what the books are. Some have more complete titles shown and are, for that reason, not as much fun. The one I picked as a favorite is more loosely painted than the others and has the word "Bloom" is big white letters with rough red outlines. The letters have a nice shimmering quality.

Also looking like they may be by the same artist were a few pictures of faces seen in extreme close-up. One of them called Kristi, a portrait of a girl, was labeled as an acrylic but looked more like a pencil or charcoal drawing with very soft shading and no color other than a very subtle green in the eyes. This one was very well done, as was one called Memories, which pictures a boy with a goofy grin and his chin resting in his hands. Both of these are skillfully drawn.

Two other works of interest were an untitled masked figure of a face with a Joker-like smile and big, pointy teeth, and a figure called High Five done in a Pointillist style with one hand extended forward with extreme foreshortening.

I wish these students luck in making it to the state competition. I just wish there was more variety in style and subject matter and a little more skill demonstrated.
South Puget Sound Community College