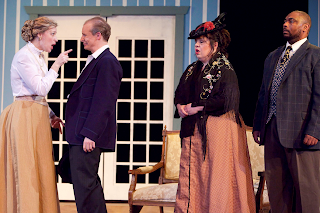 DEAN LAPIN/COURTESY OF TACOMA LITTLE THEATRE
Heidi Walworth-Horn plays Raymonde, from left, Alex Smith is Victor, Rachel Permann is Lucienne and Mark Peterson stars as Romain in “A Flea in Her Ear.”

Georges Feydeau’s popular French farce “A Flea in Her Ear” has been entertaining audiences worldwide for more than 100 years. It seems to never go out of style.

It has all the expected elements of an absurdly farcical romp: slamming doors, mistaken identity, silly fights and witty repartee with loads of sexual innuendo – or in this case not so much innuendo as comical attempts to clean up sex talk as when Victor (Alex Smith) tries to explain to Doctor Finache (Kerry Bringman) that he suffers from what is now popularly known as erectile dysfunction. The conversation is peppered with euphemisms and references to size, all of which are funny precisely because they are so obvious.

Tacoma Little Theatre’s website calls this play “perhaps the greatest farce ever written.” That is an overstatement perhaps; I can think of some Marx Brothers and Shakespeare that may top it, but it may certainly rank right up there among the greatest.

Victor’s wife, Raymonde (Heidi Walworth-Horn) suspects her husband of infidelity. At the urging of her best friend, Lucienne (Rachel Permann), she fakes a letter to her husband from a secret admirer suggesting a rendezvous at The Frisky Puss Hotel (Hotel Coq d’Or in the original) in order to entrap him. Victor is flattered when he receives the letter but thinks it was mistakenly sent to him but was meant for his handsome friend Romain Tournel (Mark Peterson). So Tournel goes to the hotel in Victor’s place, and eventually everyone else in the play, including Victor and various spouses, friends and servants all end up in the Frisky Puss – some in search of romantic rendezvous and some in search of two-timing spouses.

To stir the pot even more (and there is always something to stir the pot even more), Poche, the bell boy at the Frisky Puss is a dead-ringer for Victor. Smith is fabulous in the duel roles of Victor and Poche. Note his walk. As Victor he leans forward so much that he looks as if he’s in constant danger of falling on his face, and as Poche he leans backward just as much, seemingly defying the laws of gravity. People push him and kick him, and he’s like a rag doll being tossed about, handling the physical comedy with flair.

Some of the shouting and door slamming is overdone, but one person’s overdone is another person’s insanely funny. In fact, overdone may be the only way to effectively do farce.

Most obviously overdone was Ferraillon (Robert Osborne) kicking Victor/Poche in the rear-end every chance he got. The kicking did not have the comedic boot it should have, as it became too predictable.

Permann’s exasperated explanation of how she and Poche, whom she mistook to be Victor, tumbled and tumbled down the stairs was a masterpiece of comedic acting. Neet did a great job with the challenge of speaking with an absurd speech defect – his character, Camille, cannot pronounce consonants. Likewise, Slease’s booming Spanish accent made him just hard enough to understand to be funny without his speech being incomprehensible, and his bluster and facial tics were riotous.

The set by Dane Goulet was very nice, especially the gaudy colors and the revolving bed in the hotel. Frances Rankos’ costume designs were also fine. The turn-of-the-century dresses with the big bustles were great as was Don Carlos’ suit coat.