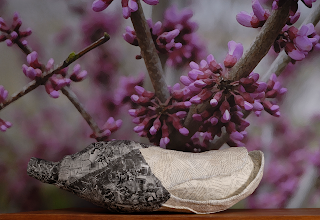 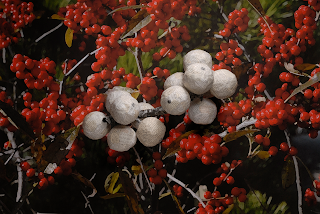 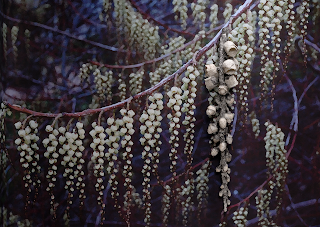 I feel like I have a stake in Holly Senn's art career. I don't; she's done it all on her own, but I still feel that way. Years ago I taught a class for Bellevue Community College where I took students on tours of Seattle art galleries and discussed the art. Senn and her partner were in the class. They were very soft spoken and didn't have a whole lot to say. I don't think she ever told me she was an artist. A few years later I was very surprised when I was asked to profile some of the artists in the Tacoma artists' studio tours and saw her name on the list - and even more surprised when I visited her studio (her garage) and saw the quality of her work. She was showing small sculptures made from the recycled pages of old books scavenged from the library where she worked. The thing that was fascinating about them was that the subject matter of most of the sculptures related to books on reading or the trees from which we get the paper to make books in a kind of circular resonance between subject matter and material.

What is fascinating is that in the years since Senn has matured as an artist but has continued to mine books and paper as subject and material. You would have thought she would have run out of ideas long ago.

I did see a slight branching out (pun intended) in the last Holly Senn installation I reviewed, which was at 908 Broadway and which was part of the Spaceworks program last fall. Still using pages from books as material, she veered off into new subject matter by replicating with paper the plaster facade of the Pantages Theater across the street. That installation was a great example of something else I appreciate in Senn's work: the appropriateness of her installations to the venues in which they are installed.

For years now I have admired the idea of installing art in the vacant windows of the old Woolworth building, and many artists I admire have installed works there, but often I have been disappointed that the works on display were more often than not simply displays of art and not installations that in any way used the unique properties of the venue. Lately they've done a better job of integrating space and works, and Senn's work fits the space nicely.

She has filled six windows with large photographs of parts of plants. Hanging in front of each photograph are sculptures of what appears to be the buds or pods of the same or similar plants.

"In my sculptures and installations I explore the life cycle of ideas - how ideas are generated, dispersed, referenced or forgotten," Senn says. "In these explorations I engage the qualities of permanence and impermanence. ... As I cut, rip, realign and glue, I reflect on each new generation's collective erasure of some element of the past and the casting of new ideas into the future. My work is as ephemeral and fleeting as ideas committed to paper or the digital sphere."

Visually the comparison and contrast of the sculpted and photographed forms are nice. Perhaps more important from a purely visual point of view is the relationship between the illusion of space in the photos, the 3-D space of the sculpture and the actual shallow depth of the windows.
Composites by Holly Senn