Harlequin Productions 'Boom': End of the world played for laughs 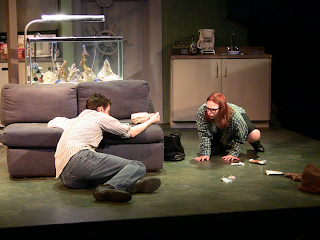 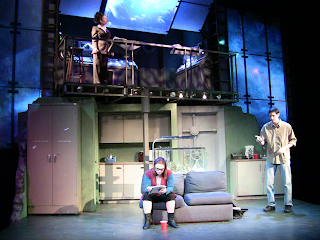 Once again, Harlequin Productions brings to the stage an astounding play impeccably produced. “Boom” by Peter Sinn Nachtrieb is a sci-fi comedy that almost defies description. It’s weirdly funny and nihilistic, but ultimately hopeful in a strange way. It takes place in a subterranean university lab that also serves as the makeshift home for a young researcher, Jules. It also is a museum dedicated to the study of extinct fish.

Jules places an ad online for “sex to change the course of the world.” A journalism major named Jo answers the ad because she is seeking “random sex as the last glimmer of hope in a decaying society.” It turns out Jules is gay and doesn’t really want to have sex with a woman, but he believes he has to save the world. He was being literal in his ad, but Jo thought “sex to change the course of the world” meant he was “that good.”

According to Jules’ calculations, a giant comet is going to crash into Earth in seven minutes. His home/lab is a safe underground survival bunker. They might be the last surviving humans and have a duty to repopulate the world. There are big problems with that in addition to Jules being gay. Jo hates children. To compound that, when they kiss, it is the worst kiss in the world. Now she doesn’t want him to touch her.

Another twist we soon discover is that the comet already hit the Earth thousands of years ago. Jules and Jo – along with the fish in his fish tank – are animatronic specimens in a museum exhibit about the only survivors. An officious museum guide named Barbara stands above them in a kind of electronic control booth that somewhat controls their actions and narrates the story while playing electronic drums.

The three-person cast is outstanding. Trick Danneker plays Jules, Melanie Moser is Jo and Casi Wilkerson is the very bizarre Barbara. Jules is a shy and bumbling geek who says the most outlandish things in the most matter-of-fact way. He then gets highly emotional and flails about like a sock monkey in the hands of an angry child when Jo says or does things that upset him. Almost everything she says or does upsets him.

Jo is an aggressive, no-nonsense young woman who dresses casually and punctuates every sentence with words that can’t be repeated in print. Moser plays her as an angry and crude young woman.

Barbara starts out as a stiff, formal and intimidating presence but gradually loosens up and becomes much more humane and down-to-earth (not down to any Earth we know).

The script presents an almost believable situation with inspired comedic dialogue. The acting by Danneker, Moser and Wilkerson under the direction of Linda Whitney is highly stylized. The elaborate set by Jill Carter and acting style bring to mind Mel Brooks’ “Young Frankenstein.”

Carter’s set is the best I’ve seen on any stage this year. The steel gray cabinets and other furnishings give the lab a futuristic, industrial look. There are giant video installations that dominate the back wall, and the balcony laboratory is crammed with an array of lights and switches– and there are special effects that should not be divulged. The set almost becomes as much a living presence as the actors.

“Boom” is a short play at 90 minutes with no intermission. It moves quickly and demands close attention because some of the jokes fly by before you have a chance to assimilate them. I’d like to see it again to catch some of the zingers that were drowned out by audience laughter.

This is a comedy for mature and intelligent audiences. As warned in the program, “This play contains adult situations and strong language … and (as far as we know) the world will not actually end.”


When: 8 p.m. Thursdays through Saturdays, 2 p.m. Sundays through April 16, with a pay-what-you-can performance at 3 p.m. this Saturday
Where: State Theater, 202 E. Fourth Ave., Olympia
Tickets: Prices vary, call or go to website for details. Rush tickets available a half hour before shows.
Information: 360-786-0151, www.harlequin productions.org
Posted by Alec Clayton at 9:05 AM