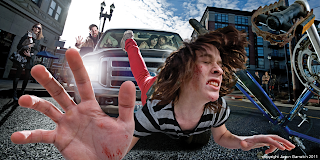 Images on the theme of change at Fulcrum

Transitions in life and in art can be momentous. A historic building comes tumbling down and precious memories fall along with the rubble, yet in its place something grander may arise. There's an accident. Perhaps someone is disfigured, and his life is changed forever. For better or for worse? In the show Progression: Photographic Images on the theme of Transformation at Fulcrum Gallery, five photographers interpret the theme of transformation narratively and metaphorically. Their various interpretations of the theme are each unique.

Kristin Giordano spent years living in Qatar where she became fascinated with the Djinn, a demon or evil being in Arabic mythology. She went out into arid desert regions on the outskirts of a city where Djinns are said to live to take photographs with a panoramic pinhole camera. Her images of a crumbling stone gate, a pile of rocks, the backside of a large billboard and others are eerie and ghostly. You can almost taste the dirt and the wind. There are even extremely subtle streaks of light - a natural result of the photographic process and the light conditions, not a manipulation of the images - that look like ghostly apparitions. Everything in her images is a dull brown or sepia color that makes it seem like the whole world is covered in desert dirt. One in particular is so light as to look like it is about to vanish.

Jason Ganwich has created a single, large photographic image of a bicycle accident. It is a powerful narrative image of a moment of transition frozen in time. It is a staged and posed photo involving actors playing various parts in the story and the skillful combination of many parts into a powerful whole. The car, the driver and passengers, bystanders, buildings and the bicyclist have all been pieced together by Ganwich from separate photographs. As an added treat, Ganwich has included smaller images of each individual photo as a tableau of the work in progress.

Jessica Uhler's take on transition is rust and decay in close-up images of sections of walls from an old military battery at Ft. Worden in Port Townsend. These are abstract images of color and texture.

Morgain Bailey is showing three diptychs of iconic downtown Tacoma buildings in transformation. These images of demolition and construction are taken from odd angles and can be seen as documentation and as exercises in structure and light.

Finally, there are three photographs from John Fisher in which filaments of light transform architectural structures into phantasmagorical images in brilliant tones of blue and green. These are a few of the same images I reviewed four months ago at Mineral. At that time I described them this way: "...the streaks of light in Fisher's photos explode and crackle into amazing strands and bursts like electricity in a mad scientist's lab."

This show is small and modest, but excellent.
Progression: Photographic Images on the theme of Transformation