Mural and prints by Nicki Sucec 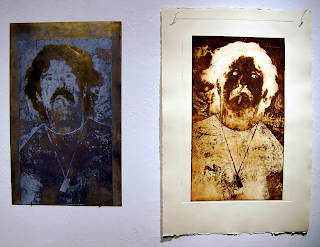 Big Brother is watching. He peers out from the walls of Fulcrum Gallery. In this instance “Big Brother” is the brother of artist Nicki Sucec whose show at Fulcrum is an homage to her brother and a testament to the variety and creativity that can be unleashed by taking a single image or idea and pushing it to the limit.

One wall of the gallery is completely covered with a large steel and copper mural featuring a haunting portrait of Sucec’s big brother. The image is rough and confrontational. It looks like a photographic negative in dark brown and copper tones of an aging hippy. He stares vacantly, his hair is disheveled, a cigarette dangles from his lips. He’s wearing on a chain around his neck what looks to be a military dog tag. Behind him is a starry night sky in which strange items float — a boxing ring, inside the ring a couple of big pillows; a toothbrush and many another esoteric little item. Although not stated in any overt manner, I get the impression that each of the objects relate somehow to Sucec’s brother. Mementoes, each of which carries strong familial references.

The artist has made many lithographs and embossed etchings from various images in the mural. Some are around 15 by 20 inches and other are a mere inch or two square, including variations on her brother’s portrait and prints of the individual items that are in the mural.

One of the more interesting of the prints places side-by-side a metal-plate portrait of the artist’s brother with a negative image of the same portrait, this one done as an embossed lithograph. The negative image is striking in its strong contrasts of stark white where the face should be dark staring out of darker areas. The eye balls are almost square. In the positive image he looks sad and perhaps frightened. In the negative image he looks threatening — from frightened to frightening by the simple expedient of reversing light and dark in the image.

Without spelling anything out, but rather leaving it to the viewer to do so, Sucec seems to delve deeply into memory and identity and the complex relationship between a brother and sister. Some of the pictures hold clues to the lives of this brother-and-sister duo either in the items depicted or in the titles, some of which are very strange and enigmatic such as (I love this title but have no idea what it means): "Seymour the Great vs Muffy Doodle Weird."

For quite some time now I, and most of Tacoma’s arts community, have been impressed with how Fulcrum Gallery keeps coming up with new, exciting and challenging shows month after month. This one continues the tradition.