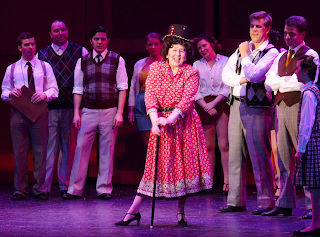 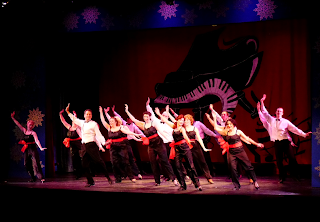 The chorus tap dances to "I Love a Piano" in Irving Berlin's "White Christmas."
Photos by Kat Dollarhide

I’m almost old enough and sentimental enough to be a sucker for schmaltz, nostalgia and old-fashioned Christmas cheer, all of which is served up in heaping buckets-full in Irving Berlin’s “White Christmas” at Tacoma Musical Playhouse.

The musical is based on the beloved 1954 movie of the same name starring Bing Crosby, Danny Kaye and Rosemary Clooney, which was loosely based on an earlier movie, “Holiday Inn,” also starring Crosby. It was the earlier movie that introduced Berlin’s famous Christmas song.

The musical is filled with familiar songs backed by Jeffrey Stvrtecky’s accomplished 14-piece orchestra and hot dance numbers choreographed by director Jon Douglas Rake. The story is silly, sentimental, heart-wrenching, filled with bad jokes (intentionally bad) and just about every Christmas tradition you can imagine, plus a huge heaping of the World War II-era patriotism for which Berlin was famous.

Mark Rake-Marona stars as Bob Wallace, a popular crooner and the strong-voiced half of a song-and-dance team. Vince Wingerter plays Phil Davis, the lead dancer of the duo. Wallace is the hero of the story and has the stronger voice. Wingerter’s dancing – most notably when coupled with Jennifer Weingarten in the role of Judy Haynes – sparks this show. (Wingerter and Weingarten are partners in life as well as on stage, which might account for how well they anticipate each other’s dance moves.) Their lovely, smooth ballroom dancing to the tune “The Best Things Happen While You’re Dancing” is the highlight of the show, inevitably bringing to mind Fred Astaire and Ginger Rogers.

The other dancing highlights are the big tap dance numbers “Happy Holidays” and “I Love a Piano,” featuring Phil and Judy and backed up by a chorus line big enough to fill the large TMP stage.

The other lead and major love interest is Kim Lavoie as Betty, the other half of the Haynes Sisters. Lavoie has a powerful and melodious voice, and she’s very attractive despite a ludicrous blonde wig. Also of note is a strong performance by Sharry O’Hare, the Ethel Merman of South Sound, in a comical role in which she pulls out almost every trick she’s learned in her half-century of musical performance.

From the love story and overblown patriotism (apropos to the time period) to the sentiment and silliness and all of the snappy tunes, this play is a Christmas card in song and dance, and commemoration of times long past. The run of this show is almost sold out. Make sure to call before going and get your tickets early.