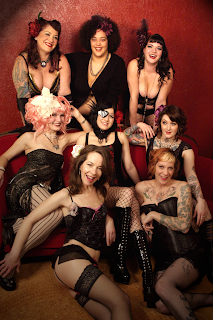 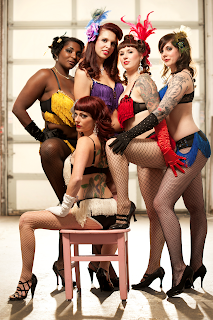 Burlesque in the South Sound

Published in the Weekly Volcano, December 23, 2010

I had a very erroneous concept of burlesque before the ladies of Olympia's Tush! Burlesque set me straight. I thought of it as a sleazy and sexist art form that denigrated women and turned men into slavering beasts.

I was surprised when women I knew from the theater world began raving about Tush! and I began to wonder if stripping was becoming mainstream. Hell, there was even a Hollywood movie about it starring Cher, no less. I began to think that maybe feminists had appropriated what was once anti-feminist and claimed it as their own. But Tush! member Bettie Beelzebub explained, "Burlesque actually has a historic tradition of beauty, sophistication, humor and class. It comes from the parody plays of the Victorian era, done with humor and often based on political or social issues of the time."

She said it is not the same as what is done in strip clubs and for the performers it can be "a very empowering undertaking." Burlesque tells a story. Each performance has a theme that is carried out by each of the performers, and it involves elaborate costumes and choreography. Most importantly, perhaps, it is funny. It's good sexy fun - more like Vaudeville than stripping, and in some ways similar to musical theater.

Tush! member Frida Fondle said, "We spend around six to eight weeks preparing for each show. Each of us is responsible for making and designing our own costumes, and we all choreograph our own dance moves."

Tush! is described in their promotional materials as "a collective of sexy, vivacious, and creative women brought together by a shared vision to rebel against commercial beauty standards" representing an "unconventional array of body types, ages, colors, and cultural identities in a powerful, intelligent, and humorous way."

Hattie Hotpants said there are three important elements to what they do: "beautiful, naked, unfettered nudity," plus humor and spectacle.

"You are expected to hoot and holler, and to let it all hang out," she said.

Now, about that movie. Fondle said, "It really is a shame that the representation of burlesque in that movie is exactly what the title means, ‘to make a mockery of, usually by caricature.' This movie does exactly that. I think that the whole burlesque community is up in arms about this bastardization of what we all thought was still an underground counter cultural art movement. It is unfortunate that the masses are now being force fed this watered-down, sleazy, sexist version of burlesque."

A new burlesque troupe called Gritty City Sirens has recently come to Tacoma, and will have its debut performance at The Swiss Dec. 23. They are Ava D'Jor, Tizzy Van Tassel, Rosie Cheexx, Funny Face Fanny and Polly Puckerup.

Van Tassel has been doing Burlesque in Texas, and she said Rosie Cheexx is a "hometown sweetheart."

The others are new to burlesque. "Our Polly Puckerup just debuted her very first solo acts at Hells Kitchen the other night," Van Tassel said, adding, "We have two more beautiful burlesque debutantes who will be dancing solo for the first time as burlesque dancers on Dec. 23 at the Swiss."

There will be multiple solo routines and group acts. "Prepare yourself for a night of glitz, glamour, humor and plenty of T&A!" Van Tassel says.
Gritty City Sirens