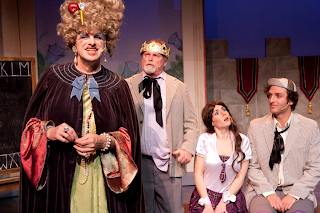 South Sound theater-goers are beginning to catch on to what a Panto is. It’s pandemonium. It is fractured fairy tales played out for both children and adults.

There are loveable stock characters that show up in almost every Panto such as “the dame,” an ugly old hag always played by a man, and “the boy,” a swashbuckling hero always played by a long-legged woman. And it wouldn’t be comeplete without the evil witch and scary monster.

In “Sleeping Beauty,” the monster is a giant puppet built by Steffon Moody of Zambini Brothers on Vashon Island. The Dame is Nurse Nellie (Roger Curtis, who has played the dame in all of Centerstage’s Pantos and who is delightfully campy but not in a drag queen sort of way). Hilary Heinz is Prince Michael. She is fabulously strong, loud and expressive and really rocks out on some of the musical numbers. Sally Brady plays the nasty witch Vuvuzela.

Other stock characters include a storyteller or narrator who connects personally with the kids in the manner of a kids’ show host and tells them to cheer the good guys, boo the bad guys and shout out warnings and other things on cue.

For example, he tells the kids that every time Prince Michael of Normandy Park is mentioned, the boys should shout “Hoorah!” and the girls shout “Woo Hoo!”

Normandy Park is one of many silly local references. Another is when storyteller Merlin (David Bestock) says Sleeping Beauty is in “a dark, foreboding place where time has stood still for a hundred years.” Nurse Nellie says, “Yes, Enumclaw!”

The silliness continues with audience participation that starts when a bunch of kids are called up on stage to sing crazy lyrics held up on giant cue cards and ends with the actors giving them bags of chips and tossing candy into the audience.

In between, there are other vaudeville-type routines, including a funny twist on the old Abbott and Costello “Who’s on first” routine and a marvelous song in which each actor sings a verse while almost hitting and kicking every other actor in an amazing bit of choreography.

I was told the choreography was worked out spontaneously with each actor devising his or her own moves. It has to be seen to be believed.

In addition to all of this insanity, there are great pop songs, some of which are slightly altered for this show, such as “For Once in My Life,” “Another Brick in the Wall,” “Don’t Stop Believing” and the theme song from “Ghostbusters.” Plus there is one noncomical song in the show: a lovely rendition of “Time After Time” with solos by Beauty and Prince Michael.

This is a world-premiere performance. There will be a couple of productions in England this year, but the Federal Way production went up a month earlier. The tradition of 12th Night is more honored in England, so families celebrate after Christmas. Traditionally, Pantos in big theatres in London run through January.

“Sleeping Beauty” is the third Panto I’ve seen at Centerstage, and I’ve enjoyed them all. There are not many performances left and tickets are going fast. ‘Sleeping Beauty’