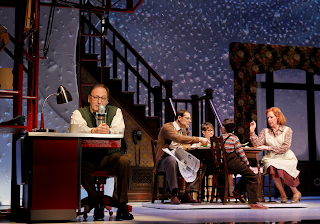 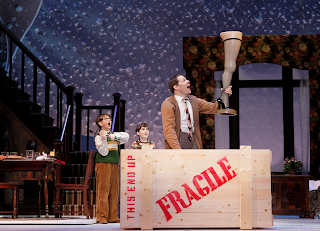 “A Christmas Story: The Musical” at The 5th Avenue Theatre in Seattle is a rousing new holiday musical with lots of heart and humor based on the stories of radio humorist Jean Shepherd and adapted from the hilarious 1983 family holiday film of the same name.

In this newly adapted stage version by Joseph Robinette, with music and lyrics by Benj Pasek and Justin Paul, Shepherd (played with subtle style and dry wit by Frank Corrado) is on stage throughout, telling the story to his radio audience as it is acted out by a fine cast headed by John Bolton (“Curtain’s,” “Monty Python’s Spamalot” on Broadway) as the Old Man, with Anne Allgood as Mother, Olympia’s Clarke Hallum as Ralphie, and Matthew Lewis as Ralphie’s little brother, Randy.

This is the first major role for Hallum, an 11-year-old sixth-grader at Washington Middle School. Locally he was recently seen at Capital Playhouse as Charlie in “Willy Wonka and the Chocolate Factory.” The theater conducted a coast-to-coast search for the perfect Ralphie that included auditions in New York and Los Angeles, as well as video submissions from across the country. Hallum auditioned in Seattle hoping for one of the smaller roles, and landed the role of the central character in the show. I can see why.

In the opening night performance, Hallum made the leap from community theater to performing with a professional cast in a major theater look effortless. His voice was strong and his demeanor confident. His opening solo on “Red Ryder” highlighted his singing talent, and then he really wowed the audience with “Ralphie to the Rescue,” in which his school classroom becomes the scene of countless fantasies, with Simon Legree tying the hapless school teacher to the railroad track, and villains ranging from pirates and cowboys to witches and Frankenstein’s monster all defeated by Ralphie and his trusted Red Ryder BB gun.

The show stopper was Bolton as Ralphie’s klutzy father. From his first pratfall down the basement stairs to his cursing rampage that precipitates Ralphie’s famous “Fuuuuudge!” curse, Bolton is uproarious. His drop-jaw expressions and loose-limbed dancing is a combination of Dick Van Dyke and Ray Bolger in “The Wizard of Oz.” His dance routine on “A Major Award” – complete with a chorus of dancing leg lamps – is as funny and joyful as anything you likely will see in a long time.

The best production numbers come in the first act. The action drags a bit in the second act, with enough moments of hilarity and nostalgia to hold attention, interspersed with a story line that limps toward a satisfying, predictable climax.

Walt Spangler’s set is stunningly beautiful and is set off with lighting effects designed by Howell Binkley that have the warm glow of the season.

As an interesting side note, Peter Billingsley, who played Ralphie in the 1983 movie, was introduced from the audience opening night. He recently signed on as a producer on this production.