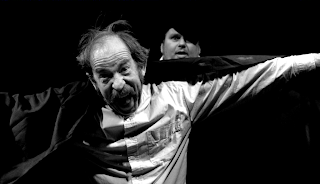 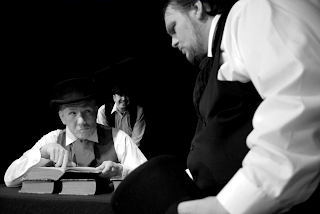 “Jacob Marley’s Christmas Carol” now playing at Olympia Little Theatre is a refreshing change from the usual theatrical Christmas fare. It turns Charles Dickens’ classic tale inside out while remaining true to its spirit and meaning. It’s quirky, irreverent and theatrically extravagant. For actors it provides a golden opportunity to ham it up to the high heavens – or hell as the case may be. Performing in this show must be an actor’s dream come true. And what a cast of actors it has: Dennis Rolly, Christopher Cantrell, Ryan Holmberg and Tim Goebel under the intelligent direction of Pug Bujeaud.

This is the back story to the familiar tale of Ebenezer Scrooge and his visitation from the ghosts of Christmas past, present and future told from the point of view of Scrooge’s dead business partner, Jacob Marley. Marley (Cantrell) lands in hell, where he obviously belongs, and is brought up before the judgment of an ancient accountant (one of many roles played by Goebel, who is billed as “Actor 4”). The accountant tells him he can be saved from an eternity in hell if he can convince Scrooge to willfully and permanently change into a kind hearted man.

Marley shouts, “Scrooge? I have to redeem old Scrooge? The one man I knew who was worse than I was? Impossible!”

Reluctantly he sets out to at least try and get Scrooge (Rolly) to change his ways. He’s accompanied by, helped by and sometimes thwarted by Bogle (Holmberg), an impish cockney sprite.

The set, designed by Cantrell, is dark and foreboding. It is a set of flat risers made from a series of black boxes on the floor with a bleak looking four poster bed. Everything is painted with lusterless black paint. Lighting effects by Cecil Sommerville consist of some starlights or snowflakes on the backdrop and a few spotlights in an often dark arena, and throughout the actors carry small candles and multi-colored lights that eerily shine red, green and blue on their faces.

The actors play multiple roles and constantly step out of character to address the audience, reminding us that this is, after all, them telling the story of their own adventure. They change voices so quickly that it is occasionally hard to tell who is speaking. When Cantrell, who was gravelly and stentorian as Marley, mentioned a young boy and then spoke in the boy’s tiny voice for a moment I thought it was a recorded voice coming from who knows where. And Goebel’s mouth turns down on one side and he speaks in a crackling voice as the old accountant, and then he rises from behind his desk and seems to physically grow larger while his voice becomes deep and full throated.

All four actors are excellent, and they seem to be having the time of their lives. Both Cantrell and Rolly are veteran Shakespearean actors, and their large expressions lend a classic air to this Victorian comedy-drama. I’ve enjoyed Goebel in many other plays, most notably “Tuesdays With Morrie” and “Don Juan in Chicago.” He displays greater range in this production than I have seen before. Holmberg might be the least experienced actor of the quartet, but he is absolutely astounding as Bogle.

Bujeaud is a fine director with years of experience in every aspect of theater. I suspect she had the sense to block out the action and give them her ideas and then get the hell out of the way and let these fine actors do their thing.

There’s only one weekend left for this show, and they are almost selling out every performance, so get tickets now.

I LOVE this show and wish more groups would do it at Christmas time.