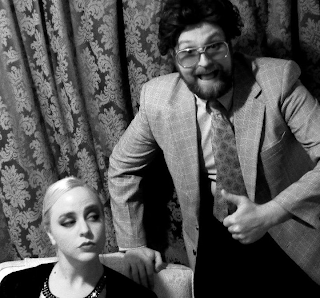 I thought “Oh yes!” and then “Oh God no, not another Christmas show!” when I was invited to Saul Tannebaum’s “Claus for Celebration” with The Jingle Belles and special guest Mona Van Horne at the Eagles Ballroom Saturday night. I had been wanting to see one of Saul’s shows for quite some time but I didn’t think I could sit through yet another Christmas show. Just the night before I had seen Harlequin’s “Stardust Christmas Carol” (watch for my review Friday in The Olympian and The News Tribune), and in the past two weeks I had seen more holiday shows than I could count on my fingers.


Somewhat reluctantly I dragged my also somewhat reluctant wife down to the Eagles. We got there long before the show started but still too early for good seats. We ended up sort of behind a post where I could see Saul but not all of the other performers. So I moved one seat to my left where I could see all but Saul. The Eagles Ballroom does not have the best seating in the world.
The show was late starting, but nobody seemed to mind because they were all drinking and chatting, and the star of the show was wandering around in the audience talking to everyone.
Saul Tannenbaum is the creation of actor, singer, musician, musical director Josh Anderson, who, once he gets into his Tannenbaum wig and glasses and white suit, never breaks out of character — not even off stage, not even away from the venue. For example, last summer he went to the Pride celebration to promote his show and wandered around in the crowd introducing himself, even to personal friends, as Saul. When Anderson gets in character he IS Saul. And what a character he is — brash and loud and loveable, and maybe just a touch unconnected to reality.
Tannenbaum introduces his guests: a trio of girl singers called the Jingle Belles, brother and sister Ricardo and Carlotta Fishman, and special guest Mona Van Horne. He tells a few tales and plays piano, but mostly turns the show over to his guest stars who entertain the audience with mixed-up medleys of holiday songs.
Like Anderson/Tannenbaum, the other show folk stay in character on- and off stage and the actors are never introduced.  Molly Gilmore named some of them in a recent article in The Olympian, specifically Anderson and Christina Collins, who does a wonderful Marlene Deitrich. Gregory Conn played Ricardo and Lauren O’Neill was one of the three girl singers, but I still don’t know who played the other parts. I just know they were all incredibly talented, funny and sexy. (It was hinted that the show was going to be risqué, but there was only the slightest hint of the risqué.)
This is the fourth Olympia show for Saul, and there’s another one coming in the spring. If this show was any indicator it will be a performance not to be missed.