This won't be a comic book ‘Annie' 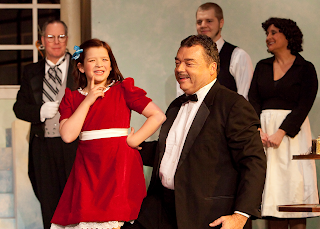 I sat in the audience at the first tech rehearsal of “Annie” at Tacoma Little Theatre and enjoyed every minute of it, even the inevitable mishaps that surely will vanish as if they never happened before tonight’s opening.

Before the complete run-through began, they worked on a couple of dance numbers, and I was lucky to get to see them practice my favorite musical number in the show, “Easy Street,” two or three times. It is a saucy, upbeat number with growling horns and comical expressions from Miss Hannigan (Roxanne DeVito), Rooster (Chris Serface) and Rooster’s girlfriend, Lily (Jenifer Rifenbery).

Sitting nearby in the audience was a dapper Oliver Warbucks (Chris Gilbert) in a gray suit and hat. He had wavy brown hair and beard. I had to ask the director, Michael O’Hare, if Gilbert was going to shave his head before opening night. After all, Daddy Warbucks is traditionally bald. He said he had decided not to base the play on the comic strip, which gives them the leeway not to have a bald Warbucks. Instead, he said, Gilbert would cut his hair short and trim his beard – a good decision considering Warbucks is one of the few characters in the play that is not an outsized comic character but a dignified business tycoon with a big heart, accustomed to getting his own way but not lording it over everyone else.

Annie (Kennedy Miller) also wasn’t wearing the traditional curly wig at the rehearsal. I don’t know if she’ll don one tonight, but with or without the wig, she looks the part. She’s small and redheaded, and has a precious smile. Her demeanor is very mature, and she has a full voice that projects well while still having a child-like quality.

There is a five-piece orchestra, heavy on the brass, that offers an enjoyable, tinny, speakeasy sound typical of the Great Depression era.

Brett Carr’s set, while not quite complete for the rehearsal, is elaborate yet functional, using a revolve to facilitate the many set changes. I particularly like the sky-blue painting and arch windows on the Warbucks home setting.

There were some problems with lighting, but I could tell it will be unobtrusive and effective by tonight. I thought the back-lighting on Miss Hannigan’s first entrance was especially effective.

DeVito plays Hannigan as brassy and loud. She’s very expressive and has a powerful voice.

Serface provides most of the comic highlights. He’s a veteran of many musicals at Tacoma Musical Playhouse and Capital Playhouse specializing in comical villains and funny voices. He’s terrific as Rooster. This probably is his best performance since “Beauty and the Beast” at TMP.

Rifenbery is delightfully animated and sexy as Rooster’s dumb-blonde girlfriend, Lily. Her dance moves are smooth and catlike, and both she and Serface nail the accents.

Gilbert, who has a buttery baritone voice, plays Warbucks as likeable and empathetic, accentuating the character’s kindness. I don’t know how much of the credit for choosing to play Warbucks in this manner goes to the director and how much to the actor, but it was a good decision.

The ensemble is universally good. Most notably Ernest Heller as President Franklin Roosevelt, Jon Huntsman in various roles including Burt Healy, and Carol Richmond and Lanita Hudson in many different roles. And of course the little girls are charming.

It’s a fairly long play at about two and a half hours plus intermission, but it goes quickly. I like that at this time of year when we’re inundated with Christmas plays, this one, while set at Christmastime, hardly mentions the season. The holiday is secondary to a bigger and very touching story.