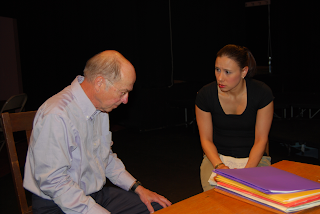 John Pratt plays a professor and Sara Henry is his student in “Oleanna” at The Evergreen Playhouse in Centralia.


I’ve seen a lot of hard-hitting, edgy, contemporary dramas lately, and I just saw another one. I drove to Centralia to see the first full dress rehearsal of David Mamet’s “Oleanna” at The Evergreen Playhouse.

This performance of Mamet’s Pulitzer Prize-winning story was well worth the drive. I have never seen a more polished first run-through of any play.

It helps that the director, Gary Morean, and the two-person cast – Sara Henry as Carol and John Pratt as her college professor – recently did this show at The Driftwood Theatre in Aberdeen.

First, a word about The Evergreen Playhouse. This is not your typical small-town amateur theater. It is a beautiful space with a large thrust stage and comfortable stadium-style seating.

It draws experienced actors and directors from throughout the region, including some of the best from Tacoma and Olympia. The director and the actors in this show have performed in many venues throughout the South Sound.

“Oleanna” is tough. It is a no-holds-barred look at sexism and political correctness.

It generally is considered to have been written as a response to sexual harassment charges brought against now Supreme Court Justice Clarence Thomas by Anita Hill. The story played out on television shortly before Mamet wrote the play, which debuted in 1992.

This show is so intense and the subject matter so volatile that when it opened off-Broadway, fierce arguments broke out in the lobby at intermission and after the performance. The director of this performance related a similar experience when he first saw it at the Oregon Shakespeare Festival. “The passionate debate was immediate and intense ... we barely got out the door of the theatre when it began,” Morean recalls.

Carol, a student, fearfully and hesitantly confronts her professor with complaints about a paper she submitted and about his teaching methods and philosophy.

The professor is arrogant, didactic and defensive. He also is under tremendous pressure – constantly being interrupted by phone calls having to do with an offer on a house that might or might not go through – and worried because he is under review by his college for tenure. He is rather sure at first that he’ll get both the house and the tenure, but his confidence quickly erodes.

In each act of the three-act play, the confrontation between Carol and the professor intensifies, culminating with her getting him fired and charging him with sexual harassment and attempted rape.

Mamet builds in a lot of ambiguity, leaving it up to the audience to decide whether the professor is guilty of any of the things she charges him with or whether she is guilty of twisting his words and actions out of revenge or political correctness gone to the extreme.

The set for this production is as sparse as can be, with nothing but a desk and two chairs in front of a black curtain. The sparse set puts the attention squarely on the two actors, which is where it rightfully should be in this two-person battle.

Henry and Pratt are excellent. They create realistic characters through body language and tone of voice and allow us to see these characters change through subtle details of demeanor, hair, clothing and posture.

In the first act, the professor is dapper in a coat and tie, and sure of himself. He lounges in his swivel chair, paces the floor and sits on the edge of his desk – an academic in full control of his world. Meanwhile, the student hugs her notebook to herself and repeatedly glances at her notes while her hair keeps falling in her face. She is fearful but determined.

In the second act, her hair and clothes are neater and she sits more erect, more in control, while the professor has removed his jacket and has become more fidgety.

As the play continues, she becomes stronger and more defiant, and he becomes more frail. She seems to grow while he shrinks.

The language is typical of what has been called “Mamet speak.” Characters talk over and interrupt each other and sentences trail off and are left unfinished, which is the way a great many people in real life normally speak. On the phone, the professor says, “Call me back in ... yeah (pause) thank you.”

Mamet also is famous for liberal use of curse words that are not allowed in family entertainment. Although there is some of that in this show – the show announcement carries a warning “adult language, not suitable for children” – the cursing is sparse and very appropriate.