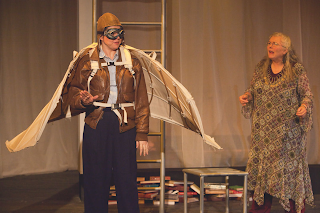 “Eleemosynary” at Tacoma Little Theatre is astonishing in many ways – from the hauntingly poetic title to Lee Blessing’s intelligent script; from the strangely sparse set and direction by Elliot Weiner to the trio of actors who breathe life into the story: Danielle Powell, Jody McCoy and Samantha Camp.

Like a memorable poem or a great painting, there are layers of complexity within a disarmingly simple story. Artie (Camp) – a brilliant but confused, sad and ferociously independent woman – ran away from her domineering mother then later abandoned the care of her child, Echo (Powell), to this same aloof and eccentric mother, Dorothea (McCoy), who accepts the responsibility while living blissfully in a la-la land within her own mind. Artie wants connection with Echo and keeps reaching out to her and drawing back at the same time, unable to love her as her own. Echo’s response is understandably ambivalent. She is in turn petulant, angry and aloof. When in desperation she asked her mother if she ever loved her, Artie’s answer is yes and no. “It’s always yes and no.”

The actors tell the story directly to the audience, smoothly alternating from narrators telling a story to characters acting it out. The story begins with grandma Dorothea in bed after a stroke has left her immobile and speechless, and it goes back and forth in time from Artie’s childhood to teenage Echo’s triumph in the National Spelling Bee and beyond.

In playing Artie, Camp displays an amazing range of emotion through subtle body language and facial expressions. She manages to make the audience root for her despite her seemingly callous abandonment of her child.

Powell is the same age as the adolescent character she plays. I mention her age because it is difficult for an actor of any age – even a 16-year-old – to convincingly portray the expressions and mannerisms of a proud and sullen teenager, especially one as complex as Echo. Powell does it beautifully, displaying acting skills one would hope for in a much more mature actor.

McCoy plays the grandmother with grace and wit. Her character is not as emotionally complex as the others. She subsumes all emotion into a fantasy-based attitude of hope expressed in her stated belief that man (or woman) can fly.

Playwright Blessing was a poet before he turned to writing for the stage and it shows in great lines like “I spent my spare time being thrilled not to be around my mother” and “Life is a long apology” (Artie) and “Grandmother never throws anything away ... even the things she was sorry for” (Echo).

Blessing stipulated sparse sets with few props so there would be little to distract from the words and the emotions. He also allowed for great latitude in interpreting the actions and emotions suggested by the dialogue. After having seen how director Weiner and his cast chose to stage this play, I can’t imagine it being done any other way. I applaud Weiner’s choice to build the few set pieces out of pipe, and I loved the wings with which Artie tries to fly.

“Eleemosynary” is a powerfully emotional play filled with great one-liners and intelligent humor expressed by complex and eccentric characters – and yet it is simple and fast-moving, with no intermission, running a quick hour and 20 minutes. I heartily recommend this play and congratulate the cast and crew on a job well done.