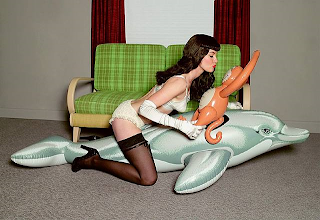 Real deal or charlatan? You make the call.

Like Warhol, Koons' life is his art. A team of assistants executed Warhol's work in a studio he called The Factory. Assistants crank out Koons' art in a factory that looks like Google world headquarters.

Duchamp invented the readymade by purchasing a urinal from a plumbing supply store and calling it art, thus revolutionizing modern art in the process. Warhol created replicas of Brillo boxes that no one could tell from the original, thus ushering in post-modern art. Koons bought spanking new basketballs and vacuum machines and other home appliances and displayed them as art and thereby confused the hell out of everybody.

Other than the Brillo boxes and some of the silkscreens of Campbell's soup cans, Warhol's repetitive images did not in the least have a factory-produced look. The images were off register and his colors were acidic and highly original. There is nothing similarly original or stimulating about Koons' porcelain statue of Michael Jackson with his pet monkey, Bubbles, or about his glass sculptures of himself having sex with his wife, Italian porn star Cicciolina. Michael Jackson in albino-white porcelain or extremely graphic sculptures in clear glass of people having sex in every imaginable way are certainly provocative subjects for art, and conceptually the choice of materials and style are brilliantly ironic; but aesthetically they are boring, as is much of Koons' art.

Take for instance, the inflatables (flowers made of vinyl), and the balloon animals (some painted and some made of highly polished chromium steel).They're just stupid looking, and that's obviously his intent. They're like bad knockoffs of Claes Oldenburg sculptures. But again, they seem to be intentionally bad, and how do you judge that?

And then there are the countless silly animals and cartoon figures and the oil paintings that remind me a lot of James Rosenquist. A lot of these are a lot of fun, and some of them are astonishingly beautiful, especially those that layer pop images in a collage-like fashion.

Is he a good artist or a charlatan? I have a hard time making up my mind. But he is certainly entertaining, and I look forward to see what he's going to come up with next.

If you can't see any of Koons' work in the flesh, check it out online at www.jeffkoons. com and see what you think.
Posted by Alec Clayton at 11:48 AM