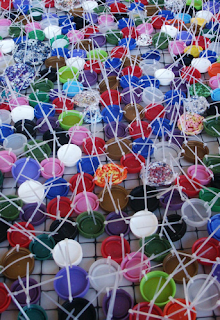 
Frankly I'm growing weary of recycled art, even if I do admire the underlying environmental consciousness. It's not a new thing; it's as old as Picasso and Duchamp. And most of it is cute or clever at best. There are exceptions, notably some of the artists represented by Matter in Olympia. But recycled art has been overhyped almost as much as Dale Chihuly.

A mediocre model of a house or portrait of a person or animal is no less mediocre just because it's made from cast-off materials.

So I applaud the exceptions to the run-of-the-mill such as Barbara De Pirro, whose art from recycled materials would be intriguing no matter what it was made of. I was fascinated with some of her works pictured in a Spaceworks Tacoma publication online, including "natural" organic forms such as snakes in real trees and a kind of beautiful glass chandelier at the Museum of Glass (actually discarded plastic). Her latest installation for Spaceworks can be found in a vacant building at 912 Broadway. It is not so startling or ambitious as those mentioned above, but it is definitely worth taking a look. And a second look.

It is called vortex plastica and has been described as "a web-like form, a spun nest, a whirling tornado and a solar system filling the void, cross-lacing the space" - a slightly hyperbolic description for a nice bit of decorative art inspired by the North Pacific Gyre, a gigantic and unnatural vortex of garbage in the Pacific Ocean. To have been inspired by something so huge and fearsome, it looks surprisingly playful and decorative, like a room divider made of tinker toys and crocheted buttons and plastic straws mounted on chicken wire.

Two doors down at 908 Broadway is another Spaceworks installation that also makes use of discarded materials. This one is called Re-Present, and it is by Holly Senn, an artist well-known for both freestanding sculptures and massive, room-size installations made out of discarded books - nearly always with themes based on books and the trees they are made from.

Re-Present is quite a departure for Senn. It consists of what at a slight distance appears to be plaster reproductions of parts of the façade of the Pantages Theater across the street. Only upon closer inspection does it become clear that the classical botanical forms are made out of torn bits of book pages. In what is an obvious refutation of my opening statement, I must say that it is the choice of material - or more specifically the surprise of discovering Senn's material - that lifts this work to a higher level than a mere reproduction of a bit of architectural detail.
Spaceworks Tacoma