Devil is in the details

“Sherlock Holmes and the Doom of Devilsmoor” at Lakewood Playhouse
Published in The News Tribune, Oct. 8, 2010
Pictured: Tim Shute as Sherlock and Kerry Bringman as Inspector Lee. Photo by Dean Lapin 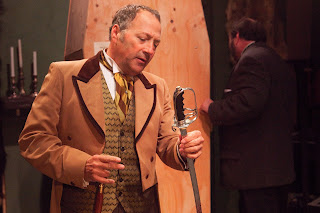 “Sherlock Holmes and the Doom of Devilsmoor” at Lakewood Playhouse is a Northwest premiere of a whodunit written by local playwright C.P. Stancich of Gig Harbor. Stancich is no novice when it comes to writing for the stage. His comedy “The Weird Sisters at Home” played the Boulder International Fringe Festival, and another Stancich-penned Holmes mystery, “Sherlock Holmes & the Spinsters of Blackmead” also premiered in the Boulder area.

“Devilsmoor” begins with an exciting, highly stylized and mysterious scene with a gang of wraithlike men in big hats or hoods and long dark coats attacking Edward Banks (Nathaniel Quinn, who also stage managed this play). They frighten him but do him no harm, like Plains Indians counting coup. Banks tries to get Sherlock Holmes (Tim Shute) to investigate his murder (even though he’s not dead), but Holmes refuses to take the case.

Shadows on the floor, dramatic music and fast action in this scene set the mood for what promises to be either high drama or a lampoon of high drama, but there is no follow-through. The next scene shifts to the drawing room of Reginald Musgrave’s (Michael Osier) manor, and what follows is mostly talk gradually leading up to a murder and the belated re-emergence of Holmes. The opening scene is barely referenced again, and the promised excitement never comes. Stancich’s play is well-plotted with interesting characters, but it needs work. There are humorous bits and a few nice surprises, but not enough of either.

By far the best character in the play is Oscar Dove (Malcolm Sturdevant), who was something of a precursor to Dr. Watson, helping Holmes on earlier cases, and is now something of a rival to Watson. Dove is droll and haughty, and Sturdevant plays him with style. He has the wittiest lines and delivers them with impeccable timing. His strange limp and odd way of counterbalancing it with a wave of his left arm give comic definition to the character. If only more of the other characters had similarly unique eccentricities.

The other highly enjoyable character is Miriam Cray (Dayna Childs). Obviously respected by the other characters, who refer to her throughout as Mrs. Cray, this character seems to be smarter than everyone else, except Holmes, of course, and more down to earth. Childs makes her come alive. Her gestures and speech patterns, and even her outrageous scream, seem perfectly natural.

The other women in the play are a servant named Mrs. Selkirk (Leigh Duncan) and Banks’ girlfriend, Ann Prahlly (Camille Mesmer). These characters need development, but Duncan and Mesmer play them well considering how little they have to work with.

Shute makes an excellent Holmes, playing him without the exaggerated smugness sometimes associated with Holmes and with a subtle humor, as if there is a laugh just under the surface of his every statement (Holmes is not above dramatic flair played as the expense of his compatriots).

Too many bobbled lines from some of the actors on opening weekend indicated they needed another week of rehearsal, but otherwise the acting was excellent. The set by Blake York, lighting by Jason Burg and sound by Alex Smith were outstanding.

If you like a good mystery, see “Sherlock Holmes and The Doom of Devilsmoor.”