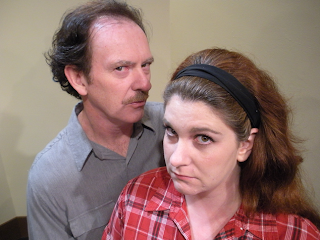 It's hard to imagine a more difficult challenge for an actor than to play a perverted, evil or disgusting person sympathetically. Tim Hoban does just that with skill and conviction in Prodigal Sun's production of Paula Vogel's Pulitzer Prize-winning play "How I Learned to Drive" at The Midnight Sun Performance Space in Olympia.

What might be almost as difficult is for a woman to play a teenage girl and, furthermore, to play that same girl from age 11 to 35. That’s what Heather Christopher does in this play, and it is the best performance I’ve seen from this veteran actor.

Inspired by “Lolita,” which Vogel said she has read many times, “How I Learned to Drive” is difficult for both cast and audience for a number of reasons. First and most obviously, it is difficult because of the subject matter: incest and pedophilia. Second, it is difficult because the play is staged in an innovative manner with the use of a Greek chorus that presents humorous lessons in driving, with random jumps in time, and with actors stepping in and out of character to speak to the audience.

The writing is smart and poetic, especially in its extended use of driving as a metaphor for life and love, and in the light it shines on these complicated characters.

Christopher’s character, Li’l Bit, has been shaped by her family’s crude obsession with sex. (They all have nicknames based on their genitalia.) Everyone, from her grandfather to her school chums, relentlessly tease her about her big breasts. She is uncomfortable with her body, and she is simultaneously attracted to and repelled by sex. She is romantic, rebellious and highly intelligent. Christopher poses provocatively, bats her big eyes, pouts, and goes instantly from flirtatious to angry to wounded. She is absolutely believable as a pre-teen and as a grown woman, as a dreamer and as a frightened child.

Hoban plays Uncle Peck as a smooth operator and a sleazy manipulator who nevertheless loves his niece and is perhaps somewhat ashamed of his pedophilia. He speaks with a slimy Southern accent and never looks anyone in the eye. Uncle Peck is the only person in Li’l Bit’s life who treats her with respect and tenderness, which, of course, makes her susceptible to his advances. But his gentleness seems sincere, not just a way of manipulating her.

His molestation of Li’l Bit is handled in an ambiguous manner as he says he will never do anything sexual without her consent and not until she is of legal age; yet it is obvious he already has been sexual and continues to be. The only ambiguity is in how far they take it, which is left to our imagination.

The Greek chorus of Thomas Neely, Pamela Arndt and Brittni Reinertsen bring in the comic relief and provide for smooth transitions between scenes. As with Christopher, these ensemble actors have the challenge of playing many different ages as they double as Li’l Bit’s mother, aunt and grandfather, and as teenage school mates.

Neely was great as a teenage boy making clumsy sexual advances, but he seemed strained and artificial as the obnoxious grandfather. Arndt and Reinertsen are outstanding as the older women.

The molestation scenes are acted out fully clothed and are in no way salacious, but they are very difficult to watch because Christopher and Hoban are so fully in the skin of these characters. When they kiss, it is not two mature actors kissing, it is an older man and an innocent young girl, and it sets your teeth on edge.

“How I Learned to Drive” is a short play running only about an hour and a half with no intermission.

How I Learned to Drive

When: 8 p.m. Thursdays-Saturdays, through Nov. 20; special performance at 8 p.m. this Sunday

Tickets: $12, available at www.brownpapertickets.com and at the door

Information: www.olytheater.com
Posted by Alec Clayton at 6:38 AM