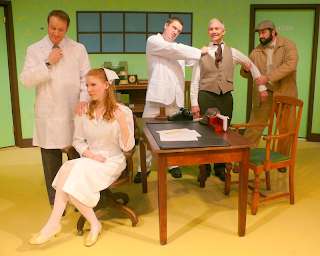 Mary Chase’s Pulitzer Prize-winning play “Harvey” has been entertaining audiences since 1941, and the movie starring Jimmy Stewart since 1950.

Understandably, it comes across as somewhat lightweight and dated in 2010. It is still joyful – guaranteed to raise some chuckles and maybe even two or three outright guffaws, although the crowd was strangely reserved on the night I saw it, which probably made it hard for the actors to give it their all.

I suspect Dave Marsh’s performance as Dr. Chumley was somewhat flat because of a less-than-responsive audience, and Ryan Holmberg as his orderly, Duane Wilson, seemed to be trying too hard, probably for the same reason.

They’ve both proven in other shows to be excellent performers. I remember Marsh was fabulous a few years back as the crazy brother who believes he’s Teddy Roosevelt in “Arsenic and Old Lace.”

Holmberg, a relative newcomer to the stage, was amazing in multiple roles in the recent production of “The Laramie Project Ten Years Later” at South Puget Sound Community College.

In “Harvey,” Holmberg started out wonderfully as a braggart with a kind of a stereotypical Bronx tough-guy accent and streetwise swagger. He nailed a comical take on a type of character it is fun to hate.

But in later scenes, when he expressed anger, he was over the top. Rather than eliciting laughter, his anger made me cringe. And Marsh simply did not bring anything personal to his performance. He brought none of the little things that define character – a shrug, a wink, a twitch, an unusual walk or posture.

I have no such complaints about the other principle characters. Silva Goetz is believable and enjoyable as Myrtle, the niece who is painfully embarrassed by her crazy uncle Elwood (Tom Sanders), and Martha Guilfoyle is wonderfully complex and delightful as Elwood’s sister Veta.

Elwood is a classically eccentric character. He’s a moderately well-off drunk who never gets too drunk and a lovable man who loves everyone and is never perturbed by anything, living by a simplistic philosophy of life that serves him well and seems to uplift everyone around him.

Sanders inhabits the role of Elwood so thoroughly and naturally that he lights up the audience every time he appears on stage. He has such a warm and welcoming smile that you can’t help but feel he’s not acting but simply being himself.

You go away feeling like the actor must be, in real life, just like the character he is playing. Plus, his natty clothes and jaunty hat (costumes by Allison Gerst) are as comforting as Elwood himself.

Veta is the most complex character of all. She’s haughty, stuck up, an unlikable social climber whom you nevertheless like, and despite her frustration and embarrassment over her brother’s mental condition (seeing and believing in a giant rabbit who talks only to him), Guilfoyle makes it abundantly clear that she truly loves her crazy brother.

Also very entertaining is Hannah Andrews as Nurse Kelly. She doesn’t have a lot to say other than in one scene in which she is interviewing Elwood, but whenever she is on stage (usually in the background), her facial expressions convey her emotions – especially when she knows her professional superiors are dead wrong, but being a lowly nurse, she can’t express it.

The choice by director Toni Murray and the set designers (Gerst, John Abbott, Jeff Plett, and Kathy Gilliam) to have two sets visible at all times works well with OLT’s thrust stage. I especially liked the citrus green walls.

“Harvey” is fun family entertainment suitable for all ages.

Thanks for your honesty. It is hard for an actor to play to an unresponsive audience. But, that should not be an excuse for a weak performance. A good actor should give his best always. Thanks again for your opinion.

How very generous and gracious you are, Mr. Marsh.