From Lambda Literary: "Amos Lassen doesn’t think of himself this way, but he is one of the most influential Amazon reviewers in the nation."

He's also listed as one of the top 100 book reviewers on amazon.com.

And he just posted an amazing five-star review of my new novel, Reunion at the Wetside.

Here's what he had to say:

Alec Clayton who wrote the very funny "The Backside of Nowhere" is back with a new book, "Reunion at the Westside", a murder mystery and a love story. It all begins at Barney's Pub in Washington State when Alex Martin reunites with Jim Bright. Jim is a right-wing Republican while Alex is a left wing Democrat and they had been friends some fifty years earlier. One would think that the two would have no future together but despite their political affiliations, they fall in love. Just about the same time a string of murders began and former performers at Barney's (drag queens) were being picked off. 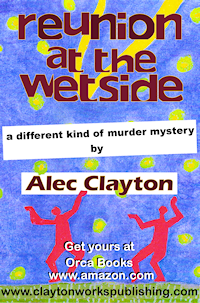 Clayton draws us into the book immediately with a mooning in a courtroom and it gets wilder as the story continues. With an epic cast of characters who come and go, this tale of romance between two elderly lovers is one of the most fun reads I have had in a long time. I laughed through "Backside" and was not expecting to have a repeat occasion to do so but I was wrong. Clayton uses his wit to give us, of all things, a murder mystery and it is replete with twists and turns as well as romantic interludes. There are subplots and more subplots in this amazing novel.

Jim thinks he knows who is responsible for the killings and the only thing that might hamper him in catching him is that he might be killed first. We see that the past is not easily forgotten in this novel because it rears itself again. In such a preposterous set-up, one would think that this novel is a bit "far-out" but the opposite is true. Clayton gives us characters that he has drawn with skill and I found myself rooting for our heroes while trying to figure out how to figure out who committed the murders. This is a fun read that is skillfully written and wonderfully related and just the perfect book for one of these cool autumn nights.

www.claytonworkspublishing.com
www.amazon.com
Posted by Alec Clayton at 9:23 AM