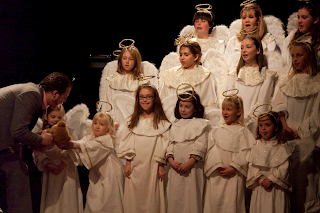 Reviewing “The Best Christmas Pageant Ever” at Lakewood Playhouse was tough. I greatly admire artistic director Marcus Walker and his staff and very much want to see this theater thrive, but I can’t recommend this particular play.

It is a seasonal favorite that is trotted out by one theater or another every year, but it is a weak script that pokes fun at a stereotypical welfare family, thereby reinforcing common misperceptions, and it relies on an unbelievable Christmas miracle to tug at the heartstrings.

The Herdman kids epitomize the quintessential family of leeches and delinquents. They’re all painted with a broad brush as mean and dirty; they fight, steal, smoke and curse while waiting for the welfare check and the charity Christmas ham to arrive. And then, inexplicably, they’re touched by the spirit of Christmas and become loveable and worthy of sympathy.

For all of its flaws – and the flaws are mostly in the script, not in the production – credit is due to the actors and director Maggie Knott for pulling off a challenging play. There are 32 actors in this show. Most of them are kids, some as young as 5 or 6 years old, and most of them have very little theatrical experience. There are scenes of controlled chaos with practically the whole cast entering and exiting from all four corners and two other entrances of the theater-in-the-round space. And there are big fight scenes (choreographed by Christian Doyle, who will be remembered for his spectacular physical comedy in “Rosencrantz & Guildenstern Are Dead” also at Lakewood Playhouse). Blocking the movements and getting everyone to say their lines on cue had to have been a major accomplishment, and for the most part, they did it without any hitches.

Blake R. York, who designs many of the sets at Lakewood Playhouse, did an outstanding job this time by essentially not designing anything. That might sound tongue-in-cheek, but this minimalism is a smart decision. In the first act, there is no set at all. There are seats on four sides, with the audience looking down on a floor-level stage area. Moving set pieces in such a space is often disastrous, but with no set, the actors can move about more freely. When props are needed, they are carried in by cast members without breaking character and in such a way as to seem part of the action. There are no disruptions. In the second act, there is a typical manger scene set up in the corner where the kids perform the birth of Christ story for the pageant.

The lighting and sound by Alexander Smith is also very effective. With the exception of two brief scenes, which I will not mention because I don’t want to give away the surprise, the lighting and sound effects are as minimalistic as the set. As actors pop in and out to talk to each other on the phone from the corner entrances, they are simply spotlighted in a darkened theater; for the longer action sequences, the entire stage area is lit. The lighting is as simple as that, and it is very effective.

The only actors who have extensive experience are Karen E. Christensen as Mrs. Armstrong and Virginia Yanoff as Mrs. McCarthy. Both of these are very small roles and both of these actors are very good. The lack of experience on the part of the rest of the cast shows. The other adult actors are not bad, they just don’t bring anything unique to their parts. Some of the young actors are quite good, and the youngest ones are charming. Katie Hackett as Beth Bradley, the teenage daughter who also serves as narrator for the story, is excellent. Jeremy Bode as her little brother, Charlie, is also very good, as is Ginny McClure as Imogene Herdman.

I was so glad to read your review. I didn't like this show either, though it was nominated for all sorts of local awards.